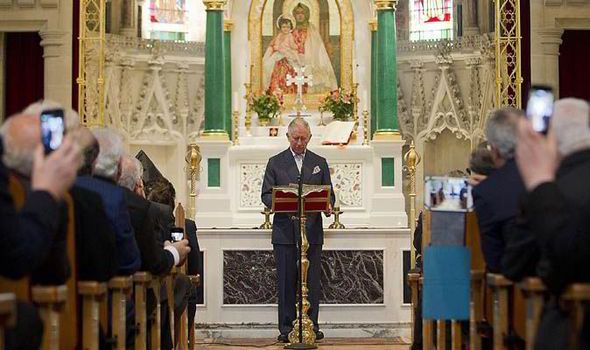 Addressing the congregation of the St Yeghiche Armenian Church in South Kensington, London, the Prince of Wales said that the faith was “quite literally, grotesquely and barbarously assaulted”.

He said: “We must all as Christians seek to do. For some time now I have been troubled by the appalling atrocities faced by Christians suffering in the Middle East…It is the most soul destroying tragedy.”

Armenian Christians have been targeted in the Syrian civil war and also suffered elsewhere.

The Prince added that the group has long lived peacefully with their neighbours.

He said: “It is heartbreaking to learn of the attacks on Christians and on Churches where they gather, such as the Church in Deir el Zour (Syria) earlier this year.” 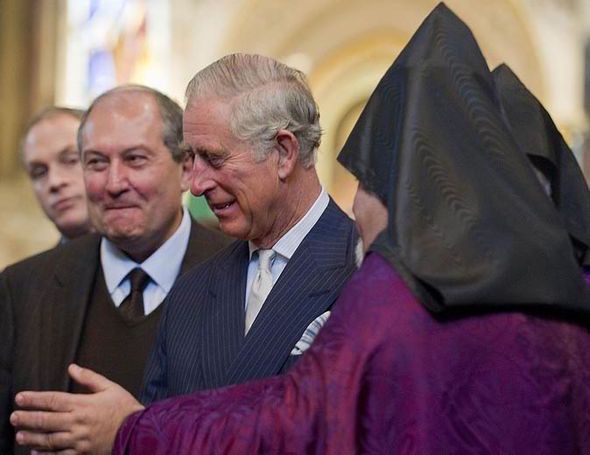 Charles meets with members of the church

Charles went on to express his sympathies for those suffering as a result of ongoing attacks, adding: “They seem so hopelessly inadequate but please, please just know truly heart felt they are.”

Avak Asadourian, the Archbishop of Iraq, spoke during to service of the problems facing Armenian Christians, particularly that the of the so-called Islamic State militant group (also known as Isis or Isil).

Speaking from his own experience, he said: “Due to assaults Iraqi Christians are leaving the country of their forefathers. In 1980 there were 1.5 million, this is now down to 400,000 due to the encroachment of Isis.

“If political measures are not adopted very soon, then in the Middle East Christian manifestations will cease to exist in its own birthplace.”

Charles also spoke with Bishop Vahan Hovhanessian, Primate of the Armenian Church in the UK, and doctor Armen Sarkissian, the Armenian ambassador.

The Prince has existing ties with the Armenian community after visiting the country in May 2013.

While there he spoke with some of the country’s leading Christian figures, and has expressed an interest in encouraging an inter-faith dialogue.

Charles also showed concern over the plight of Christians in some Middle-Eastern nations during a visit to the Coptic Orthodox Church Centre in Stevenage and the Syrian Orthodox Church in Acton last year.

Most viewed articles
Growing Cold in Faith after a Few Years in Church: Is This Normal?188
How to Survive in Modern City. 8 Essential Conditions129
Bishop Irenei Addresses a Symposium on “The Mother of God in Our Lives” in Los Angeles88
Russian Church to Help Provide Lebanon with Vaccines Against Coronavirus88
It’s All About the Resurrection – Reflecting on the Season85
Over 20 Thousand People Pray for Discrimination of the Ukrainian Orthodox Church60
Vandals Attack Serbian Church in Croatia53
Appeal for Help from the Church of the Mother of God in Austria52
Volunteers from St George Greek Orthodox Church in Rose Bay gather to cook for the homeless47
What a Caveman Said: To Perceive That Which Is Eternal1
Most popular authors
Pravmir.com team289
Archpriest Nikolai Markovsky188
Fr. Andrei Gavrilenko129
Archpriest Gabriel Rochelle85
Archpriest Georgy Kharlov52
John Voutos47
Archpriest Stephen Freeman1