Prince Stefan wore the Christening gown that His Majesty King Peter II wore on the day of his christening officiated by His Holiness Patriarch Dimitrije of Serbia in 1923 in Belgrade, and his godfather was King George V. 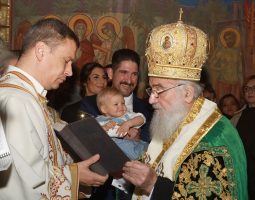 After the christening, His Royal Highness Prince Stefan acquired the right and obligation to be the bearer of the Grand Cross of the Royal Order of Karadjordje Star (1st class), which is the highest decoration of the Royal House. 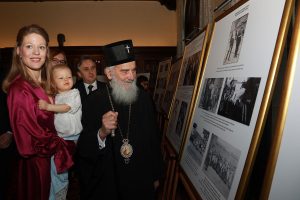 HRH Prince Stefan was born in Belgrade, Serbia on Sunday, 25 February 2018 at 10:30am. With the blessing of His Holiness Patriarch Irinej of Serbia, the bells of Belgrade’s St. Sava Temple tolled heralding the birth of the newborn member of the Serbian Royal Family. That was the first time that the 49 bells of the biggest orthodox temple in the Balkans announced such a birth. The bells of St. George church in Oplenac and Zica monastery tolled heralding the birth, too. This birth of a male child was the first one in the Royal Family in Serbia after 90 years when HRH Prince Tomislav was born in Belgrade, who was the brother of HM King Peter II, the grandfather of HRH Prince Philip.

Metropolitan Onuphry Gives Advice on How to Make Important Decisions

Metropolitan Hilarion: “Human Life Must Be Protected Even at the Embryo Stage”

The life of every human embryo must be protected by law, and also by doctors, said Metropolitan Hilarion…

Most viewed articles
Good News from His Eminence Metropolitan Joseph157
Courage,  Anyone?106
The Emigration of Abraham79
Moleben for Peace in the Holy Land to Be Held Tomorrow in Moscow72
By Love and Loyalty to God Women Build Up the Church68
Go and Proclaim the Good News39
Metropolitan Hilarion: “Human Life Must Be Protected Even at the Embryo Stage”20
Metropolitan Onuphry Gives Advice on How to Make Important Decisions20
Most popular authors
Archbishop Joseph of New York and Metropolitan of All North America157
Pravmir.com team111
Archpriest Geoffrey Korz106
Archpriest Lawrence Farley79
Metropolitan Hilarion (Alfeyev)67
Priest Luke A. Veronis39
Maria Trushanina1