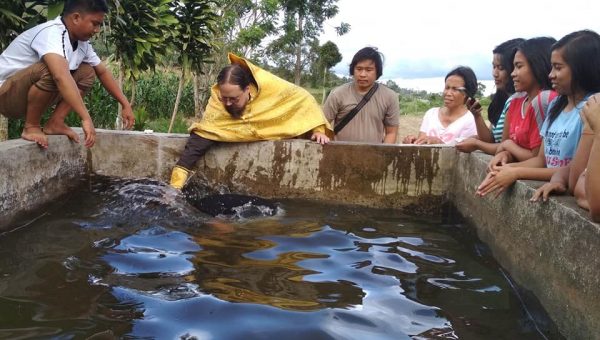 Another mass Baptism was celebrated in the Philippines on Sunday, uniting 16 souls to Christ in His Church, Fr. George Maximov, the baptizing priest, reports on his Facebook page.

As Fr. George told OrthoChristian, the converts were former members of the Anglipayan Church. The Aglipayan Church, or, more correctly, the Philippine Independent Church, is a popular religious movement there. It was founded in 1902 by a former Catholic priest named Gregorio Aglipay who afterwards became a freemason; later it broke with the Catholic Church and is currently in communion with the Episcopal Church of the USA. Below, enjoy a video of a young Filipino girl singing “It is Truly Meet” (“Axion Estin):

By the initiative of a group of priests, from 2015 a number of Christian communities on the island of Mindanao, created in the beginning of the 20th century, began to move into the jurisdiction of the Moscow Patriarchate.

In 2015-2016, work was carried out on catechizing the Filipinos receiving Orthodoxy, services were celebrated by clergy of the Russian Orthodox Church, new churches were built, and liturgical and spiritual texts were translated into the local Cebuano language. For example, a special app “300 Sayings of the Saints of the Orthodox Church” was recently developed in the Cebuano language.

Abp. Sergius was appointed to administer the parishes of Eastern and Southeastern Asia, including the Philippines, on October 21, 2016.

Fulfilling the will of the hierarchy, Abp. Sergius has made efforts to revive the Iveron parish in Manila which had been active since 1934, for which the Filipino Minister of Foreign Affairs pledged his support, and to send a permanent cleric to the Filipino capital, as well as to organize pastoral care for Orthodox compatriots living in the Philippines, and those from the local communities who have converted to Orthodoxy.

An administrative and spiritual-educational center for the coordination of pastoral care of the members of the communities of the Moscow Patriarchate, catechesis of Filipinos who have decided to accept the Orthodox faith and for preparing candidates for teaching in theological schools of the Russian Orthodox Church is currently being created in the city of Davao on the island of Mindanao.

For more on Orthodoxy in the Philippines, see the article, “It is Infinite Grace to Become a Part of the Orthodox Church: Orthodox Filipinos on how the Orthodox faith has transformed their lives.”