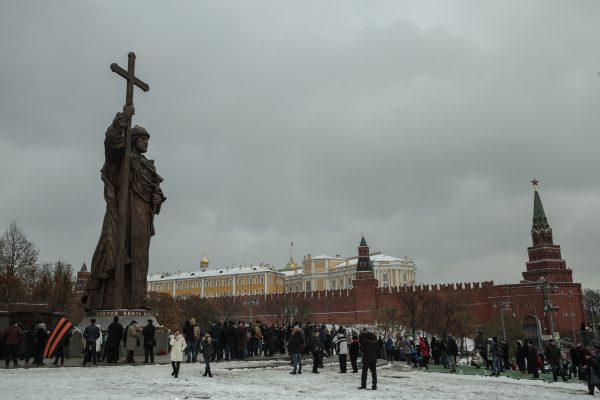 “His epoch was full of achievements, and the Baptism of Rus was of course the most important, defining and essential of them,” Putin said in his speech.

“This choice was the common spiritual source for the peoples of Russia, Belarus and Ukraine, and laid the foundations of our moral standards and value priorities which continue to define our lives to this day,” he said.

“It is this solid moral foundation, unity and solidarity that helped our ancestors overcome difficulties, live and achieve victories to the glory of the Fatherland, strengthening its power and greatness from one generation to the next,” Putin said.

“And our duty today is to work together to confront modern challenges and threats, while relying on spiritual covenants and the invaluable traditions of unity and harmony, and to preserve the continuity of our thousand-year history as we move forward,” he said.

Putin called the opening of a monument to Prince Vladimir an important event both for Moscow and all of Russia, and also for all Russian compatriots living abroad. He said also it was symbolic that the monument was opened on Unity Day.

“The new monument is a tribute to our prominent ancestor, an especially revered saint, national leader and warrior, and the spiritual founder of the Russian state,” he said.

“Prince Vladimir went down in history as a unifier and defender of Russian lands, and a far-sighted politician who created the foundations of a strong, unified, centralized state,” he said.