Source: B92
A recent statement by a member of the government in Priština concerning plans to demolish a Serbian Orthodox church in that town has caused reactions.
Natalya Mihailova | 23 April 2014
The Serbian Orthodox Church (SPC) Eparchy of Raška and Prizren called on Tuesday Dardan Gashi's pronouncement "an open provocation." 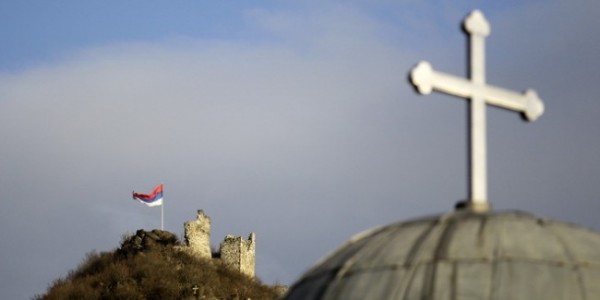 The Kosovo Albanian official, in charge of spatial planning, was on Monday quoted as saying by the Priština website Telegrafi that the Church of Christ the Savior that is still under construction was being built illegally. The website ran the article under the headline, “I will demolish the Church of St. Nicholas.”
The eparchy said in a statement that it had secured all the necessary paperwork for the construction, and that claims about the structure being built illegally were false. Noting that Gashi “did not even know the name of the church” in question, the eparchy accused him of wanting to damage inter-ethnic and inter-religious relations in Kosovo and Metohija, “and precisely during the greatest Christian holiday, Easter.”

It further said that Gashi’s statement can only be interpreted as an attempt to commit ethnic and religious discrimination, “in the service of the upcoming elections in Kosovo.”

The eparchy stressed that the SPC was recently informed “directly from the very top of the Kosovo government” that they supported the building of the church, and that international representatives in Kosovo had been informed of this.

According to the eparchy, Gashi previously, “due to his inappropriate statements to the media and attempts to politicize issues related to cultural heritage” blocked the work of a mixed commision set up to implement protected zones, and noted that the commission was co-chaired by “EU’s special representative for the Serb Orthodox heritage.”

The Citizens’ Initiative Srpska, a political group gathering Serbs in Kosovo, has condemned in the strongest terms Gashi’s statement.

“Such ill-considered and inappropriate statements have been very harmful to the Orthodox cultural heritage in Kosovo in the past, and we urge minister Gashi to tone down his rhetoric and demonstrate his political ambitions through actions that correspond to the age we live in and the right of all people to religious belief,” said a statement.

“During the March (2004) Pogrom, 35 Orthodox temples were destroyed in just two days, including churches built in the 14th, 15th and 16th centuries, and it has been hinted that the unfinished cathedral of Christ the Savior in Priština would be turned into ‘a museum in memory of Kosovo Albanians’,” the Initiative said.

“Such statements by senior Kosovo government officials make the Serbs even more fearful, reminding them of March 2004, when Serbian Orthodox Church temples were razed, with over 4,000 Serbs driven out of the province and over 800 Serb homes torched,” the statement warned.

“We urge the international community, the EULEX and KFOR that they react urgently to at least partially calm the unease among the Kosovo Serbs. Is someone looking for an excuse for desecrating Serbian temples and will we have to apply at Gashi’s ministry for permission to practice our religion,” the Initiative asked, and continued:

“How is it possible that the international community has still not issued a statement regarding this clear, apparent case of violation of the right to religious belief in the 21st century? Even today, the temples of the Serbian Orthodox church are protected by the KFOR and the Kosovo Police and most are enclosed by barbed wire.”

The Initiative urged”peace, wisdom, a fair political battle and creation of healthy and democratic society with respect for the rights of all communities in Kosovo as the basis of co-existence in a region burdened by its past.”