Procession With Relics of St. Demetrios in Thessaloniki (VIDEO) 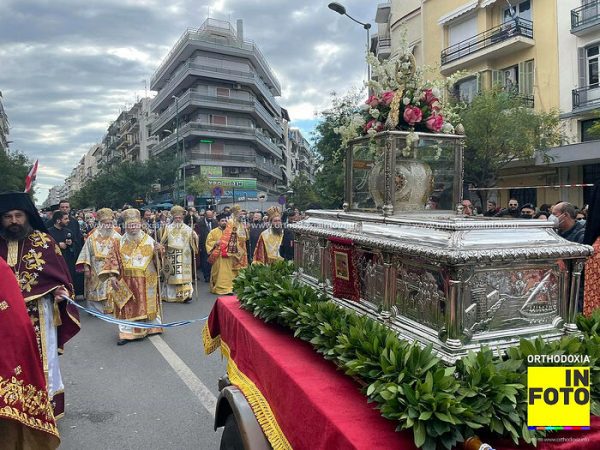 The Orthodox faithful of the city of Thessaloniki celebrated the feast of their patron saint on Monday and Tuesday with a procession with his relics and icon in addition to the Divine services.

The holy relics of St. Demetrios the Myrrh-Gusher are kept in the church named in his honor in Thessaloniki. And following the Divine Liturgy there on Monday, the relics were brought out in procession through the city streets, together with a wonderworking copy of the Panagia Portaitissa Icon, reports the Orthodoxia News Agency.

Thousands of pilgrims participated in the holy march together with several hierarchs and representatives of the armed forces, the Security Corps, the Greek Red Cross, and the local authorities. Great Vespers for the feast was celebrated in the evening. The Divine Liturgy in honor of St. Demetrios was celebrated the next morning. A Doxology was also served, as the feast coincides with the anniversary of the liberation of the city from Ottoman rule in 1912.