Crossing the Atlantic Ocean without leaving his office, St. Vladimir’s Assistant Professor of Homiletics and Rhetoric The Rev. Dr. J. Sergius Halvorsen presented a paper at a conference hosted by St. Tikhon’s Orthodox University in Moscow, Russia. Founded in 1992, the University has hosted an annual theological conference for 24 years and this was Dr. Halvorsen’s second year to participate via the internet.

The theme of this year’s conference, “Distance Education in Theology: Practice, Problems, and Prospects,” fell within Dr. Halvorsen’s area of expertise. As one who is familiar with the challenges and benefits of distance learning, he directs the Doctor of Ministry Program at St. Vladimir’s, now in its final stages of meeting New York State requirements prior to receiving full authorization.

The professor’s paper, offered to the Russian students on January 22, was titled “The inverted classroom: how effective teaching goes beyond content delivery.” “Good teaching goes beyond simply giving a lecture,” he explained to his virtual Moscow classroom, with the aid of a translator. “The inverted concept is gaining traction as a way of educating, and it works like this: students view videotaped lectures outside of class, while time in class is used for discussion and engagement, rather than passive listening.” 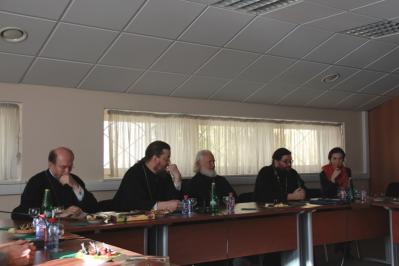 The St. Vladimir’s professor emphasized that it is critical for seminarians to focus on practical applications throughout their years of theological study. “In the last judgment,” he stressed, “Jesus never asks anyone how much do you know, but what did you do?” The Church in Russia, he added, is dealing with staggering numbers of new converts and there is an urgent need for solid theological teaching in the distance learning context. “I’m impressed by the work they are doing at St. Tikhon’s in Moscow. Clearly they are laboring to reach out to a vast population of Russians who have received little intentional Christian formation.”

Saint Tikhon’s Orthodox University and St. Vladimir’s plan to collaborate significantly in the next few years. Last October, St. Vladimir’s Chancellor/CEO The Very Rev. Dr. Chad Hatfield and Dean The Very. Rev. Dr. John Behr met with members of St. Tikhon’s faculty to discuss cooperation in the creation of an Institute of Sacred Arts. More information about the Institute is available in the “SVS Strategic Plan 2020,” recently approved by the Board of Trustees.