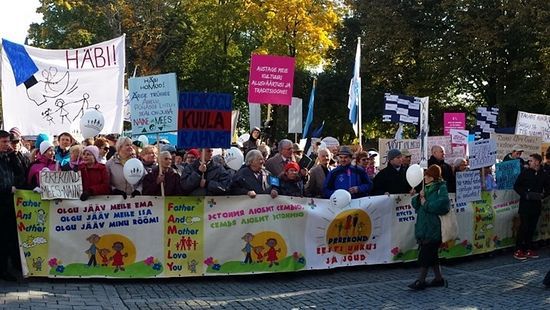 Several thousand people came for a rally in the Toompea hill in the city center organized by a foundation promoting family and traditional values to protest against the co-habitation bill allowing marriage to same-sex couples, currently debated in parliament.

The bill has already passed first reading; the second one was expected this December.

However, the parliament decided to fast-track the bill, which was proposed by 40 deputies out of the total 101. The second reading will be held on October 7 and the third one on October 9. It has also been decided to pass it by a simple majority of votes.

Although public opinion polls show that most people oppose the bill, the government is set to do whatever it takes to get it through.

Prime Minister Taavi Roivas told a governmental press conference last Thursday that he favored its passage. In his view, the bill will demonstrate the society’s tolerance towards sexual minorities.

Most viewed articles
How to Get Rid of Spiritual Infantilism?105
How to Respond to Opposition to the Gospel101
A Piece of Rock Falls Down on the Skete of St. Anna on Mt. Athos84
His Beatitude Metropolitan Tikhon Issues Statement on Tragic School Shooting in Texas61
Three Words47
Romanian priests in Madrid draw conclusions on the benefit of praying together with family members45
test1
Most popular authors
Priest Andrei Chizhenko105
Archpriest Basil Ross Aden101
Pravmir.com team84
Metropolitan Tikhon of All America and Canada61
Archpriest Geoffrey Korz47
Aurelian Iftimiu45
Maria Trushanina1