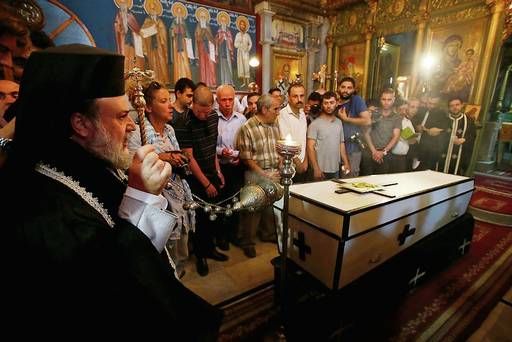 People pray over casket of Palestinian Christian woman who doctors said was killed in an Israeli air strike. Reuters/Suhaib Salem

The Sunday service had been taking place in a morning of quiet and calm, a rare chance of reflection amid the turbulence of war. That ended as the last prayers were being held, the sound of air strikes and tank rounds echoing not far from the church: the “humanitarian ceasefire” was over.

Around 2,000 people, the vast majority women and children, including infants, had gathered at the Greek Orthodox church in Zaytun and, although caring for them was meant to be shared with the Katib Welayat, most, all of them men, went to the mosque to pray and to use the washing facilities. Families sleep on mattresses in the corridors and rooms of the church and adjoining buildings, meals are provided and doctors from a nearby private hospital have been providing medical care.

The midnight prayers for the last Friday of Ramadan, the holy month of fasting, were held at the courtyard of St Porphyrios. “It would have been simply too risky going there, they might have bombed the mosque,” Sajal Abu-Hamsha wanted to explain. “We certainly would not go and live there, the Israelis have bombed so many mosques already.”

Sajal and her husband Fadil cannot take their family of 10 back to their home at the town of Beit Hanoun. They returned during the ceasefire on Saturday to find it had been pulverised.

St Porphyrios has been hit by tank shells, blowing up water tanks, damaging a house belonging to the church, as well as some tombs in the adjoining graveyard.

“That was last Monday and we haven’t been hit since. The Israelis know where we are and I can only hope what happened was a mistake,” said Alexios, the Archbishop of Tiberias and Gaza.

“People are scared, they don’t want to leave their home, petrol for the car is a problem,” pointed out the Archbishop. Later in afternoon, the body of a Christian woman was found buried under debris nearby.

The total death toll for Palestinians stands at 1060, according to health officials in Gaza. Forty-three Israeli soldiers have been killed.

The Israeli military insists that Muslim holy places had been hit because they were being used by militants.

The al-Adawi, an extended family of 30 had arrived outside St Porphyrios. They had left their home following fierce bombardment.

They had tried UN shelters, unused schools, to find they were full. Now they have been told there was no room at the church either.

The al-Adawis were experiencing the social strains on a society fractured by more than 100,000 people on the move. “We were staying with my brother-in-law, but he became unhappy with having so many people, that is the reason we went back to our home,” explained Mohammed al-Adawi. “But it got really dangerous this morning, so we left. We had put all our hopes on this church, all we need is somewhere to sleep.”

Two men joined the conversation. “We can’t have 100 people coming here every day,” declared Ahmed Shabaan. “Everyone is under pressure here, they should stay in their own areas, or they should keep going, maybe to Gaza City. This area cannot take any more.” His companion offered them a temporary place at the mosque. “You will be alright there,” he told them, before admitting that he was not staying there himself.

The family were adamant they were not going to go down that path. “I got this at a mosque,” claimed Safwan al-Adawi, pointing to a cut on his head, “and I had just gone there to pray”.

Mr Shabaan, who was keen to stress that he was an American citizen and had served briefly in the US army, was dismissive: “That is the problem here, it’s the culture, people think others should look after them.” (© Independent News Service)

Most viewed articles
Growing Cold in Faith after a Few Years in Church: Is This Normal?125
Be Thou My Battle Shield109
It’s All About the Resurrection – Reflecting on the Season79
Bishop Irenei Addresses a Symposium on “The Mother of God in Our Lives” in Los Angeles76
Russian Church to Help Provide Lebanon with Vaccines Against Coronavirus70
Orthodox Church Damaged by Earthquake Restored in Philippines54
Over 20 Thousand People Pray for Discrimination of the Ukrainian Orthodox Church42
Volunteers from St George Greek Orthodox Church in Rose Bay gather to cook for the homeless36
How to Survive in Modern City. 8 Essential Conditions1
Most popular authors
Pravmir.com team242
Archpriest Nikolai Markovsky125
Archpriest Lawrence Farley109
Archpriest Gabriel Rochelle79
John Voutos36
Fr. Andrei Gavrilenko1