Source: Interfax-religion
Natalya Mihailova | 30 May 2016
Athos, May 30, Interfax - Russian President Vladimir Putin and Patriarch Kirill of Moscow and All Russia visited Athos where they chaired the celebrations dedicated to the 1000-year anniversary of Russian monasticism on the Holy Mount. 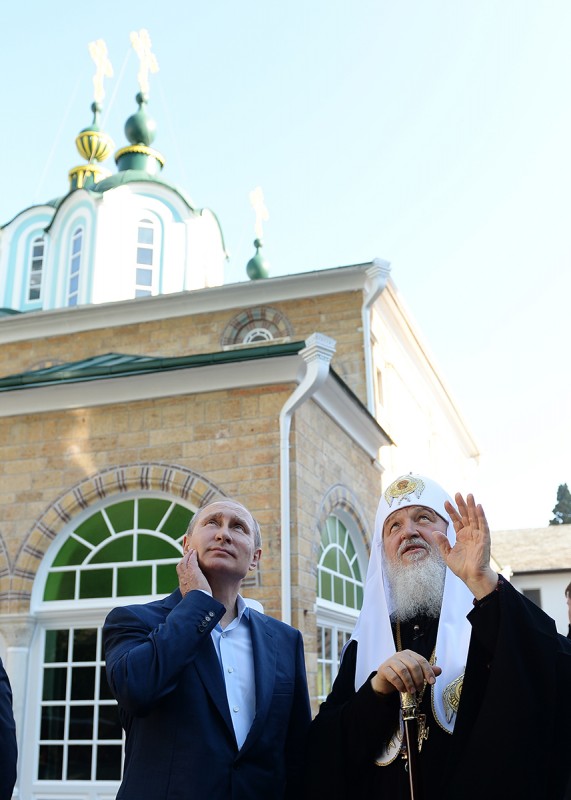 Speaking to the monks and the rector of the Russian St. Panteleimon monastery, Putin reminded he had been here in 2005 and called the changes “miraclous,” pointing out to efforts on restoring the monastery.

At the meeting with members of the Holy Kinot, the president called the role of Athos extremely important at the present time when “Orthodoxy in Russia and other countries confessing it strengthened.” He expressed hope for the development of relations between Russia and Athos and said that over 11,000 Russian pilgrims visit the mountain every year.

Patriarch Kirill in his speech in St. Panteleimon monastery said that Athos inhabited by people from various countries “shows the example of ecumenical Orthodoxy and we should treat it with care.”

According to him, today everyone who comes to Athos sees this “ecumenical dimension” of Orthodoxy, hears divine services in different languages and has a chance to get acquainted with different cultures that live together as one family.

“People coming to your place do not know about your problems, they do not measure your sanctity or sinfulness, they look at you as an example. Do not destroy the image Athos forms in minds of Orthodox people, live in peace, show the icon of Orthodox unity, and let each monk show the world an image of sinful, but saving person,” the patriarch said.