Source: Sputnik News
Russian President Vladimir Putin congratulated Patriarch of Moscow and All Russia Kirill on his 70th birthday and praised his contribution to the development of inter-religious and inter-ethnic dialogue, the Kremlin press service said on Sunday.
Natalya Mihailova | 21 November 2016
MOSCOW (Sputnik) — According to the Kremlin, Putin sent a message to Kirill, where he stressed that the patriarch devoted many years of selfless service to the Russian Orthodox Church, and consistent defense of its values ​​and ideals. 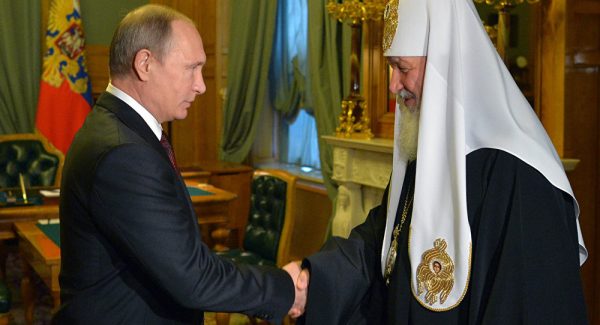 “You have devoted years to selfless service to the Russian Orthodox Church, to the consistent and resolute defense of its values and ideals. Your tireless efforts to preserve the unique historical, cultural and spiritual heritage of Russia, to support the institution of family and in the upbringing of the young generation have earned you the most sincere respect. And, of course, I should stress the incredible contribution you are making to fostering the interfaith and inter-ethnic dialogue, in strengthening peace and public concord in our country,” the message read as cited by the press service. On Saturday, the Kremlin said that Putin had signed the Executive Order on awarding Patriarch Kirill of Moscow and All Russia the Order For Services to the Fatherland, I degree, which is awarded for the outstanding contributions to the state.