Source: Interfax-religion
Natalya Mihailova | 25 May 2017
Moscow, May 24, Interfax - Russian President Vladimir Putin has noted the good relations with the leadership and people of Egypt. 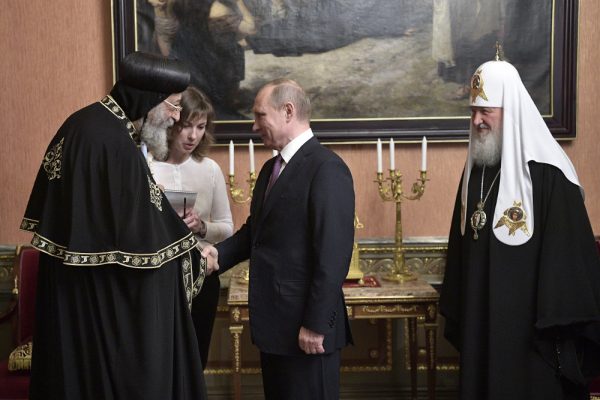 “With Egypt, we have very good relations, of course with all Egyptian people without distinction of religion,” Putin said at a meeting with Coptic Patriarch Tawadros II.

The meeting took place on Wednesday at the working residence of the Russian Orthodox Church leader, Patriarch Kirill, where the president arrived to congratulate the latter on his name day.

Putin asked Tawadros II to convey, when the occasion allows, his warmest wishes to the Egyptian president and all Egyptian people, noting that talking to the Coptic patriarch, the man representing Christianity in Egypt, was particularly pleasing for Russia.

For his part, the Coptic patriarch thanked Putin for the possibility to meet up, and noted the good relationship between Russia and Egypt. The Coptic Church endeavors to maintain national unity between the Christians and Muslims in this Arab country, he said. “We will be praying for better relations with Egypt,” Tawadros II said.