Putin: new year will be better than previous one

Source: Vestnik Kavkaza
Natalya Mihailova | 07 January 2017
Russian President Vladimir Putin took part in Orthodox Christmas service at St. George’s (Yuriev) Monastery in Russia’s Veliky Novgorod. After Christmas liturgy he said that 2017 will be much better than the past year. 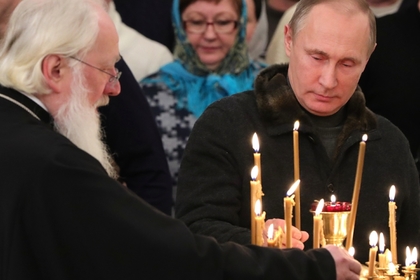 He congratulated Orthodox Christians and all Russians on Christmas celebrated according to the Julian calendar on Saturday, the Kremlin press service said.

“The Christmas days illuminate our life with special joy, wake the kindest feelings, and bring us to the spiritual origin and traditions. This is the time for good thoughts and deeds, sincere care about the near ones and those who need assistance and support,” the president’s congratulatory telegram says, TASS reports.

The Russian president noted the huge and unique role of the Russian Orthodox Church and other Christian denominations in reviving high moral values and preserving rich historic and cultural heritage.

“They do a lot for harmonizing international and inter-religious dialogue, preserving civil peace and accord in this country. Such a great and constructive work deserves deep gratitude and respect,” he said.