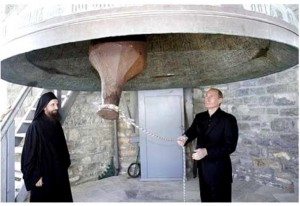 Russian President, Vladimir Putin, is going to visit the Aegean on the yacht of an entrepreneur friend. Although it is difficult to tell Putin’s plans for sure, it seems that after Mount Athos, which he visits every year, the Russian president wants to see the Monastery of Saint John the Theologian located in Patmos.

The Greek Orthodox monastery founded in 1088 in Chora on the island of Patmos has been declared a World Heritage site by UNESCO. It is built on a spot venerated by both Catholics and Eastern Orthodox as the cave where St. John of Patmos had visions. In 2012, 40 monks resided there.

Putin will also visit Mystras. The last Byzantine emperor, Constantine XI Palaiologos, was the despot of Mystras before he ascended the throne.

Political commentators in Russia believe that Putin’s new “turn” to religion even on his vacation is part of a communication strategy to show worshipers and traditional Russians that despite his divorce, he remains true to his values.

In each case, Greece will be benefited by pilgrimage tourism, especially from the Russian market.

Most viewed articles
Don’t Poke the Bear: Three Reminders about the Reality of Demons259
Who are the Right People, and Who are the Wrong People?202
Drifting Away101
Patriarch Daniel Urges Everyone to Pray and Take Care of Their Health During the Pandemic96
Patriarchate of Antioch Warns Parents Against Violent Shows76
Most popular authors
Fr. Gabriel Bilas259
Bishop THOMAS Joseph and Fr. David Hyatt202
Priest Luke A. Veronis101
Aurelian Iftimiu96
Pravmir.com team76