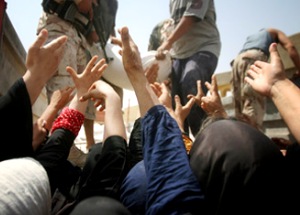 With the blessing of His Holiness Patriarch Kirill of Moscow and All Russia, the collection of humanitarian aid to the Syrian people has begun through the efforts of the Imperial Orthodox Palestinian Society (IOPS). Muscovites have met this initiative with a quick response. People are bringing in dressings, foodstuffs, children’s food and stationary as well as monetary donations to help those who suffer from war in remote Syria. In monasteries, which have become aid collection stations, boxed have been installed for money. The humanitarian aid collected in Russia will be handed over to His Beatitude John X, Patriarch of Antioch and All the East, and to Syria’s Supreme Mufti Ahmad Badreddin Hassoun.

On November 28, 2012, Patriarch Kirill, in his capacity of chairman of the IOPS Committee of Honorary Members, in his address to the IOPS Council, made an appeal for humanitarian aid to Syrian Christians. On March 21, 2013, he met with Metropolitan George of Homs who came from Syria, and after this meeting the implementation of this project started.

At present in war-ridden Syria, militants have been engaged in the methodical destruction of Christianity. On March 29, 2013, Bishop Luke of Seidnaya, Orthodox Church of Antioch, told the mass media about the catastrophic condition of Syrian Christians. He stated that 130 000 Christians were driven away from their homes as of that day. There is a systematic destruction of Christian churches and killing of people. ‘The damage inflicted on our church is enormous. They are destroyed, broken, looted. If a human life does not have any value for criminals, will they spare our shrines? Our parishioners are attacked and beat up. All these things acquire a ‘lawful status’ because there is a rebellion and nobody protests’, he said. Thus, in Homs, extremists massacred Christians, killing hundreds of people. Similar things can be seen in other regions in Syria.

In this situation the Syrian people urgently need help.

The aid will be collected till April 10 inclusive.