Source: Orthodox Christian Network
Tens of thousands of people across the country have been evacuated; an estimated two million people affected by the floods; an estimated 950,000 locally displaced.
Natalya Mihailova | 31 May 2014 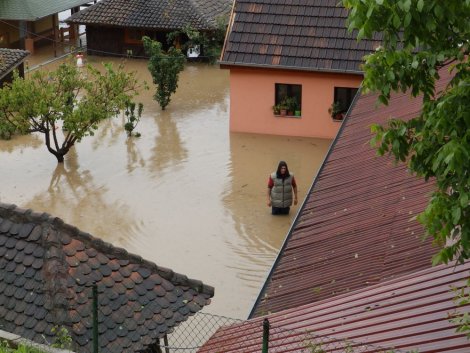 May 30, 2014 (Baltimore, MD) — The Serbian village of Jablanica is home to twins Aleksandra and Andrijana, 10, the only children among eight families living in the remote enclave. The road that connected the girls to school and the rest of the villagers to the outside world was washed away by Serbia’s catastrophic floods two weeks ago. The surge of water from record rainfall also destroyed 12 bridges across Gledicka River, cutting off power and water to entire villages in the mountainous area surrounding the city of Kraljevo, and leaving hundreds of families with difficult access to healthcare and other vital services. 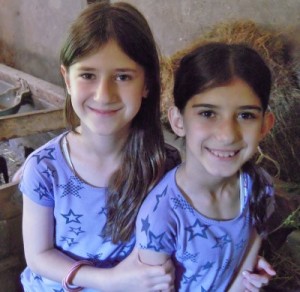 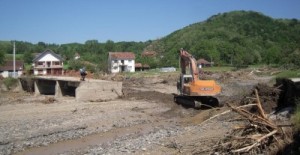 CAPTION: While the home of twins Alexandra and Andrijana, 10, escaped damage from Serbia’s catastrophic floods, the bridge that connects their village of Jablanica to the outside world was washed away. The surge of water from record rainfall destroyed 12 bridges in the area, cutting off power and water to entire villages surrounding the city of Kraljevo, and leaving hundreds of families without access to healthcare and other vital services. IOCC is on the ground, distributing emergency relief items and providing clean up support for isolated flood survivors. CREDIT (both photos: Nenad Prelevic/IOCC)

Tens of thousands of people across the country have been evacuated; an estimated two million people affected by the floods; an estimated 950,000 locally displaced. From its offices in Serbia and Bosnia, International Orthodox Christian Charities (IOCC) is responding to the immediate needs of flood survivors in the region. IOCC is working closely with local relief partner, Red Cross of Serbia, to reach remote rural areas and distribute emergency relief items such as drinking water, hygiene items, and household supplies to isolated elderly and families with small children. IOCC is also supporting clean-up efforts, equipping 100 volunteers from Red Cross of Kraljevo with tools and supplies to help families return to their homes and livelihoods as quickly as possible, and to reduce the risk of diseases and other health problems by removing debris, and cleaning and disinfecting homes that have been exposed to stagnant water.

Residents in the flooded villages around Kraljevo are particularly vulnerable, still recovering from a devastating earthquake in 2010 that left numerous homes in the area damaged or destroyed. Many of the villagers are impoverished elderly folk who lacked the resources to rebuild and are now forced to live in unstable homes at further risk from flood-induced landslides.

IOCC, an ACT Alliance member, has had a presence in the Balkans since 1992 when it opened its Belgrade office at the invitation of the Serbian Orthodox Church to respond to the humanitarian crises created by the break-up of the former Yugoslavia. Two decades later, IOCC continues to focus on long-term, self-sustaining activities aimed at addressing the diverse and changing needs of the society.

HOW YOU CAN HELP

You can help the victims of disasters around the world, like the Serbia and Bosnia floods, by making a financial gift to the Balkans Flood Relief Fund which will provide immediate relief, as well as long-term support through the provision of emergency aid, recovery assistance and other support to help those in need. To make a gift, please visit www.iocc.org/Balkans or call toll-free at 1-877-803-IOCC (4622), or mail a check or money order payable to IOCC, P.O. Box 17398, Baltimore, MD 21297.

IOCC is the official humanitarian aid agency of the Assembly of Canonical Orthodox Bishops of the United States of America. Since its inception in 1992, IOCC has delivered $488 million in relief and development programs to families and communities in more than 50 countries. IOCC is a member of the ACT Alliance, a global coalition of more than 140 churches and agencies engaged in development, humanitarian assistance and advocacy, and a member of InterAction, the largest alliance of U.S.–based secular and faith-based organizations working to improve the lives of the world’s most poor and vulnerable populations. To learn more about IOCC, visit www.iocc.org.