Rebuilding of Saint Nicholas at WTC to Commence with Ground Blessing Oct. 18

Source: Greek Orthodox Archdiocese of America
Natalya Mihailova | 13 October 2014
NEW YORK – A Ground Blessing ceremony for the Saint Nicholas National Shrine at the World Trade Center is set for Saturday October 18, 2014 at 12:00 noon. The ceremony will include a combined prayer service of blessing of the site (agiasmos), and adoxology (a service of thanksgiving). 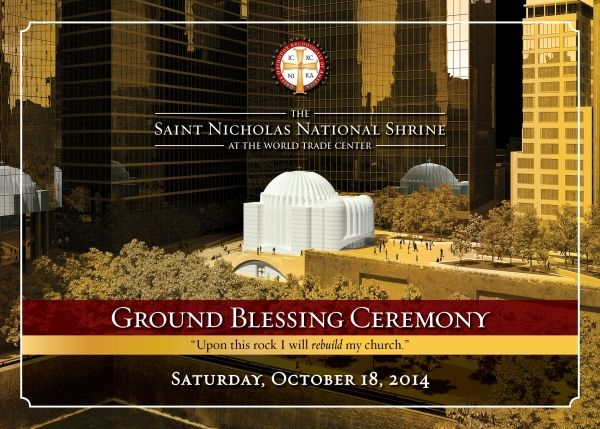 Established in 1916, the small Greek Orthodox Church of Saint Nicholas was the only house of worship destroyed on Sept. 11, 2001 when the South Tower fell and completely obliterated the old church edifice. The new Saint Nicholas National Shrine will be rebuilt only a short distance away from its original location, at 130 Liberty Street and will be overlooking the 9/11 Memorial.

Archbishop Demetrios of America, primate of the Greek Orthodox Church in America stated:

His Eminence Archbishop Demetrios of America will preside at the historic event with the participation of the hierarchs of the Holy Eparchial Synod of the Greek Orthodox Archdiocese of America.  Expected to attend are officials from the City of New York, officials of the States of New York and New Jersey, chaplains and interfaith representatives, family members of victims of 9/11, representatives of Archdiocesan institutions and organizations and many faithful Orthodox Christians.

Faithful from around the country have been invited to attend the Ground Blessing marking the start of the rebuilding of St. Nicholas National Shrine, a Greek Orthodox church, a house of prayer and a place where people of all faiths will be able to visit while touring the 9/11 Memorial and the Memorial Museum at the World Trade Center.  The new church, designed by world renown architect Santiago Calatrava, will be a modern evolution of the Byzantine style church with a dome, and will fit in with the steel and glass structures of the surrounding area. The upper level of the church will include a non-denominational bereavement space, also open to all.

The Ground Blessing event is open to all faithful, however there is limited seating.  Entrance is at the corner of Greenwich and Liberty Streets. Attendees are advised not to bring backpacks or bags. For those unable to attend, the service will be available on satellite and will also be live streamed on the Internet at www.stnicholasgroundzero.org and www.goarch.org