Source: Orthodox Christian Reflections
Fr. Theodore Stylianopoulos | 03 June 2022
At the Last Judgment, so St. Symeon the New Theologian writes, Christ will produce exemplary saints from every station in life and so demonstrate that it is possible for every person, whatever one’s work or employment, to attain to salvation and sainthood, rendering all excuses for what they are. Let us meditate from time to time on this teaching. 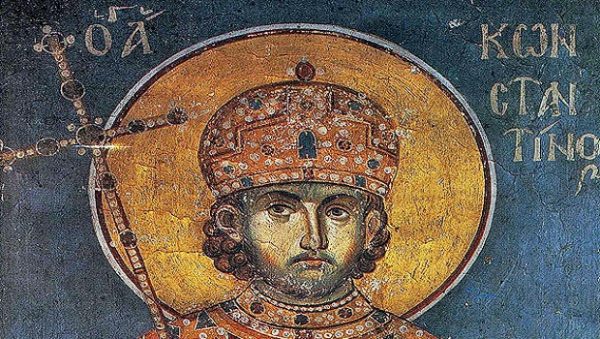 Among the disciples of Jesus there were mostly Galilean fishermen and ordinary farmers. Matthew the tax collector may have been well educated and a trained professional in the Roman bureaucracy to do his job. John, the brother of James, was intellectually gifted in order to compose the magnificent Gospel of St. John, if he is indeed its author as handed down in tradition. In films Judas is sometimes portrayed as a Hamlet-lite figure, an intellectual with burning conceptual questions, but we know nothing of this from the texts of the Gospels.

We have an astonishing variety of persons in the constellation of the saints, including men and women and children: from farmers to teachers, from lawyers to doctors, from ascetics to missionaries, from cooks to theologians, from charismatics to philosophers, from soldiers to kings, from deacons to bishops.

St. Luke the Evangelist was a doctor. St. Paul was a missionary. St. Ignatius was a Bishop. St. Justin Martyr was a philosopher. St. Basil was a great philanthropist. St. Gregory of Nanzianzus was a preeminent theologian. St. Macarius of Egypt and St. Symeon the New Theologians were charismatics. St. John of the Ladder was an ascetic. St. Demetrios was a teacher. St. Theodore the Recruit was a soldier. St. Constantine the Great was an emperor.

Born in a pagan family (ca. 272 AD), St. Constantine established a career in the military proving to be an exceptional leader and skillful politician. His life was one of continuous struggle for power and dominance, far from a solitary and peaceful climate conducive to sainthood. His inner circle involved intrigues for succession, including members of the imperial family who were executed as real or imagined plotters, under the reign of Constantine.

Before defeating his rivals and becoming sole Emperor, Constantine had a vision or dream of a cross shining brilliantly in the sky and the words, “In this sign conquer,” serving as an inspiration to his victories. As Emperor Constantine surely perceived the ascending influence of Christianity on society and recognized the need of unity in the Empire.

For its own part, the Christian Church despite its powerful growth faced two significant threats; external persecution by the Roman government and internal division due to the Arian heresy which denied the full divinity of Christ.

Church and Empire needed each other and both historically cooperated to achieve as much peace and unity as it was possible. Already in 313 Constantine together with his co-Emperor Licinius issued the Edict of Milan granting legal status to Christianity as a religion. The edict read: “I, Constantine, Emperor . . . grant both to the Christians and to all the free choice of following whatever form of worship they please.” This freedom of religion is not to be confused with the declaration of Orthodox Christianity as the official state religion which did not happen until Emperor Theodosius ca. 380 AD.

Although the life of Constantine was not marked by the evangelical virtues such as love, kindness, forgiveness, purity of heart and humility, which usually define personal sainthood, the Emperor did ask for and accepted Christian baptism at his deathbed. We must honor his decision and trust that it was made with sincere faith and proper repentance.

The Church acknowledged him as a saint on account of his decisive contributions to Orthodox Christianity not only at the time of great unrest and persecution but also for all of the Church’s future growth by means of symphonia, harmonious and positive cooperation between Church and state, which of course was not without its own problems.

St. Constantine made three great contributions to the Orthodox Church. One was the granting of freedom to continue her strong growth and expansion. A second was the Ecumenical Council of 325 AD against the Arian heresy, which created a universal institutional organism to deal with all future heresies and other ecclesiastical major problems. A third was the founding of the city of Constantinople at the location of the ancient town of Byzantium, a founding which had immeasurable impact on the history, theology and practice of the Orthodox Church to this day.

St. Constantine has had a bad press in modern times by liberal intellectuals and church critics both in the rarified world of universities and the world of popular writings and films, notably The Da Vinci Code. The intent of the criticism, seeking to undermine faith and Church, was to highlight the alleged mixture in the Church of pagan and Christian elements and also the alleged control and abuse of the Church by the state for purely political ends.

These one-sided and scurrilous criticisms have been answered with precision and fullness by historical scholar Peter J. Leithart in his book Defending Constantine: The Twilight of an Empire and the Dawn of Christendom (2011). The author deals with the pro and cons of St. Constantine’s contributions in a spirit of fairness and realism, considering the deep and often diverse interests of Church and state in history.

When we remember the invincible witness of St. Athanasius and St. Basil over against the threat of state persecution, and their theological contributions behind the formation of the Nicene Creed which we recite at each Divine Liturgy, we may be assured that the Orthodox Faith based on Christ and the Gospel has retained its authenticity and integrity throughout the centuries, whatever the cultural and political vicissitudes. It is up to us to honor the Orthodox Faith through our thoughts, words and deeds.

St. Symeon the New Theologian has a telling teaching for us who sometimes may invoke the nitty gritty difficulties of our job, whether as restaurant waiters or lawyers, judges or politicians, business people or actors, musicians or laborers, or any other form of work, as excuse for our lack of devotion to Christ and the life of the Gospel. At the Last Judgment, so St. Symeon writes, Christ will produce exemplary saints from every station in life and so demonstrate that it is possible for every person, whatever one’s work or employment, to attain to salvation and sainthood, rendering all excuses for what they are. Let us meditate from time to time on this teaching.

A recent opinion piece was entitled “America Has a Scorn Problem.” The commentator highlighted the internal rivalries among…

A notable archaeological site in the old city of Jerusalem is the pool of Bethesda. Pilgrims and tourists…