Source: ROCOR
Natalya Mihailova | 14 October 2014
As part of the celebration of the 700th anniversary of the birth of St Sergius of Radonezh, a regular session of the Synod of Bishops of the Russian Orthodox Church Outside of Russia was held in Cleveland, OH. 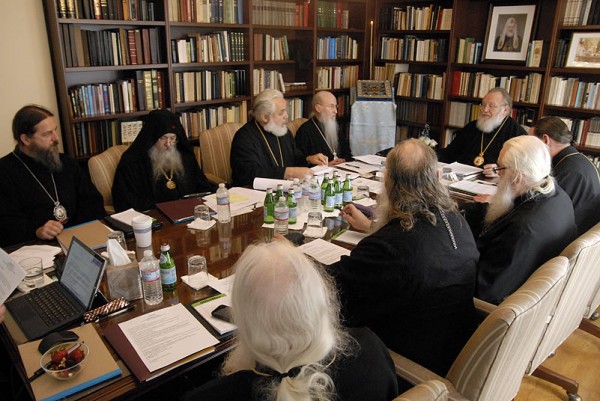 On Tuesday, October 7, 2014, Metropolitan Hilarion opened the session by welcoming the participants and expressing special thanks to Vladyka Peter for organizing his warm hospitality. The hierarchs then reviewed the schedule of services at the Cathedral of St Sergius in Cleveland.

Archbishop Mark spoke on the recent visit of the Kursk-Root Icon of the Mother of God “of the Sign” to Voronezh and the Kursk Diocese, and about the status of the monasteries of the Russian Ecclesiastical Mission in Jerusalem. Bishop Nicholas reported that next year, should His Holiness Patriarch Kyrill of Moscow and All Russia grant his blessing, the miracle-working icon will again visit Kurk as well as Ekaterinburg and the city of Ufa. Vladyka Nicholas also asked the blessing of the Synod of Bishops to lead a pilgrimage to the Holy Land around the date of the Ascension of the Lord.

Archbishop Gabriel, treasurer of the Synod, then gave a detailed financial accounting and read the report of the Auditing Committee.

Then, with the blessing of Metropolitan Hilarion, His Grace Bishop John of Naro-Fominsk, Administrator of the Patriarchal Parishes in the USA, was invited to report on the recent meeting of the Assembly of Canonical Orthodox Bishops in the USA, during which Vladyka John outlined the history of the venue and its work over the last five years, by describing the work of the individual committees of the Assembly. Thereupon, the hierarch continued their discussions during a trapeza luncheon.

In the afternoon, the bishops approved the request of Protopriest Martin Swanson, Dean of the Orthodox Pastoral School of the Diocese of Mid-America, to relieve him of his duties, and appointed Protopriest Gregory Joyce, Secretary of the Diocese, as the new dean.

Discussing the situation in the Diocese of Australia and New Zealand, the Synod of Bishops appointed the Rector of Holy Cross Monastery in West Virginia, His Grace Bishop George of Mayfield, as the Vicar of the President in administering to that diocese with the title “Bishop of Canberra.”

Other administrative matters were discussed, as well as intercessions by the hierarchs for awards for clergy and laity of their diocese.