Source: DECR
Natalya Mihailova | 21 June 2014
On 19 June 2014, a session of the Holy Synod of the Ukrainian Orthodox Church took place in the Synodal Hall of the Kievan Laura of the Caves under the chairmanship of Metropolitan Onufriy of Chernovtsy and Bukovina, Locum Tenens of the Kievan Metropolitan See. 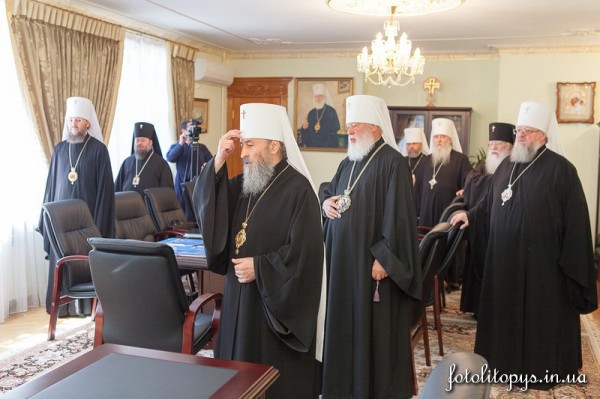 Before the session members of the Synod visited His Beatitude Metropolitan Vladimir of Kiev and All Ukraine who is undergoing medical treatment.

Heard at the session were reports of Metropolitan Hilarion of Donetsk and Mariupol and Metropolitan Mitrofan of Lugansk and Alchevsk on the situation in the Donetsk and Lugansk dioceses of the Ukrainian Orthodox Church. Cordial gratitude was expressed to the bishops, cleric and monastics who continue their ministry there at the difficult time. It was resolved to raise money for humanitarian aid to the civilians and to victims of the military conflict in the regions. The members of the Ukrainian Orthodox Church were asked to ardently pray for the cessation of discord and enmity among people and for peace and tranquility to be granted to the people of Ukraine.

An address to President Petro Poroshenko of Ukraine was adopted, mentioned in which were attempts to ruin interreligious accord in the state by attacks and attempts to destroy churches and places of worship. The need was underscored for ensuring impartial attitude to all religious organizations and for truthful coverage of their activities in the media.’ On behalf of the clerics and laymen of the Donetsk and Lugansk regions the Holy Synod asked the President ‘to take all possible measures to stop the bloodshed of which civilians are suffering and to begin peace talks.’

An appeal to the bishops, clerics, the monastics and laymen was also adopted. ‘Our Church unites people of different languages and cultures. Members of the Ukrainian Orthodox Church live in the east, west, north and south of Ukraine. WE do not divide our flock on political, national or social grounds. We are one in Christ,’ the document says. The importance of pastoral ministry aimed at the achievement of peace and accord was underscored. Text of the prayer for peace and cessation of internecine strife was approved for reading in the churches of the Ukrainian Orthodox Church.

Each week during Lent, as you know, I’ve been writing about the…

Most viewed articles
Receiving Christ and satan234
Patriarch Kirill Sends His Condolences to Queen Elizabeth II over the Death of Her Husband136
Don’t Miss The Ladder123
Can God Break A Promise?64
Patriarch Kirill: Faith in the Lord Gives Us the Ability to Distinguish Between Good and Evil55
Metropolitan Hilarion: Faith is the Foundation of the Religious Life49
First Orthodox Prayer Book in Portuguese Published in Portugal44
The Transfiguration of Our Lord and Savior Jesus Christ2
Participating in God’s Vision1
devy-france-121
Most popular authors
Pravmir.com team235
Archpriest Michael Gillis234
Archpriest Geoffrey Korz123
Fr. James Guirguis64
Metropolitan Hilarion (Alfeyev)49
Priest Dustin Lyon1