Rejecting Self-Centered Idolatry Through Love for Christ in Our Neighbors 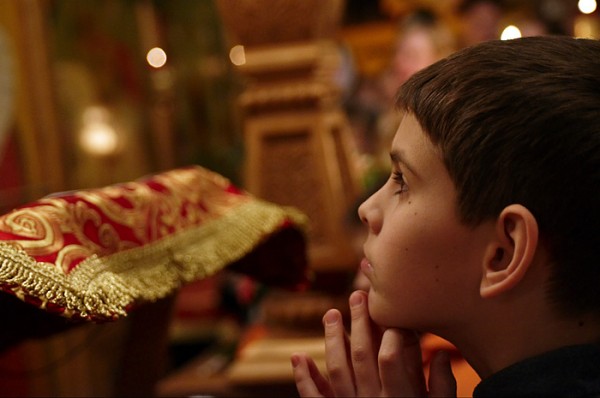 As with anything else in life, it is possible to make religion simply a means of getting what we want.  Self-centeredness is a subtle temptation that so easily distorts even our highest commitments.  We must be constantly on guard against making everything about ourselves, for otherwise we will easily fall into a form of idolatry in which we attempt to use God and everyone around us for our own purposes.

That is what the tenants did in our Lord’s parable of the vineyard.  They did not own the vineyard, but were leasing it out with the arrangement that the landlord would get his fruit at harvest time.  But when he sent servants to collect the fruit, the tenants beat and killed them.  They did the same thing to the next group of servants that he sent, and ultimately killed the landlord’s son because they wanted to take his inheritance.  In other words, they wanted not only all the fruit, but the vineyard itself.  They showed no respect for anyone and would stop at nothing to fulfill their greedy desires.

Christ spoke this parable against the Sadducees and Pharisees in the days leading up to His crucifixion.  Right before this parable, St. Matthew reports that the Lord said that tax collectors and prostitutes would enter the Kingdom of God before those who had so terribly distorted the faith of Israel for the sake of their own power.  He had also recently cleansed the Temple in Jerusalem by chasing out those who had made God’s house a den of thieves. The religious leaders of the Jews rejected Him as the Messiah, handing Him over to crucifixion by the Romans, because He was a threat to their influence, status, and goals.  In doing so, the Lord foretold in the parable that they were rejecting the corner stone, the very foundation, of their life in God.

In today’s epistle reading, St. Paul calls the Gentile Christians of Corinth to a very different way of life. They were not physical descendants of the Hebrews of the Old Testament, but had become their spiritual heirs through faith in Christ.  The promises to Abraham have been extended and fulfilled in our Lord, Who is the Savior of all Who turn to Him with humble faith and repentance. As those grafted into the olive tree of Israel, the Gentile Christians stood on the one true foundation of Christ, the true Corner Stone, in Whom even strangers and foreigners have become “a chosen people, a royal priesthood, a holy nation.” (1 Pet. 2:9)

St. Paul exhorts them to “be watchful, stand firm in your faith, be courageous, and be strong. Let all that you do be done in love.”  As a former Pharisee, he knew how easily even the best religious teachings and practices may be distorted by self-centeredness, pride, and a desire for power over others.  The Corinthians had massive spiritual problems, but he holds up to them the example of “the household of Stephanas” in their devotion “to the service of the saints.”  He reminds the people to obey and honor those who embody such faithfulness.  He stresses the importance of keeping love for Christ at the heart of their common life: “If anyone has no love for the Lord, let him be accursed.”  St. Paul knew that the Corinthians desperately needed good examples to follow, even as he knew how the faith could be so easily distorted by those driven by self-love instead of love for Christ.  He instructed the Corinthians to be on guard against anything that distracted them from loving God with every ounce of their being and loving their neighbors as themselves.   And, of course, the Lord Himself had taught that, if we love Him, we will keep His commandments.  (John 14:15)

The contrast between the selfishness of the tenants in the parable and the way of life to which Christ calls us could not be more stark.  On the one hand, we encounter those who are so consumed with selfishness and disregard for others that they will even kill innocent people.  The Lord spoke this parable against those who rejected and crucified Him in the name of their religion and nation.  They were the respectable religious leaders of their day and enjoyed their position and influence.  They wanted a Messiah who served their agendas, and they could not tolerate One Who showed compassion to sinners, blessed Gentiles and Samaritans, and proclaimed a Kingdom not of this world in which “the last will be the first, and the first will be last.” (Matt. 20:16)   So just as the tenants in the parable killed the son of the landlord in order to get what they wanted, those who had corrupted the faith of Israel conspired to kill the Son of God.

Here we have a reminder of where the self-centered distortion of religion inevitably leads: to an idolatry so profound that it rejects the true God.  It not only refuses to worship Him, but does its best to reject Him completely, to make Him totally irrelevant to how we live our lives.  The danger, of course, is that it is so easy to keep up the illusion that we are serving God even as we reject Him, when we do so in the name of religion. That is why the idolaters of every generation who place nation, race, or any group or goal before the way of Christ may actually believe that they serve the Lord in Whom “there is neither Jew nor Greek, slave nor free, male nor female, for you are all one in Christ Jesus.” (Gal. 3:28) In reality, however, we turn away from Him and bring judgment upon ourselves when we proclaim our righteousness even as we fail to see His image and likeness in every human person.  Like the Sadducees and Pharisees of old, we will end up rejecting the true Corner Stone of our life in God if we live that way.

We must also remember the impact upon ourselves of making whatever small donations we can to help our needy neighbors.  The Church has always known that almsgiving is a powerful tool for fighting self-centeredness, for helping us learn to redirect our love from ourselves to the Lord and our neighbors.  It is a way of investing ourselves in the life of the Kingdom and of offering ourselves for the fulfillment of God’s purposes in the world.  In doing so, we guard against the selfish distortion of religion that we see in those who rejected Christ in the first century and those who reject Him today by worshiping nation, politics, race, money, or any other human goal.  By offering even a small portion of our resources out of love for Christ in our neighbors, we open ourselves more fully to the eternal life of the One Who offered Himself on the Cross for the salvation of the entire world.   He is love, and we unite ourselves more fully to Him when we put off serving our own desires in order to meet the needs of others with humble faith.

So unlike the tenants in the parable, let us offer the fruit of our labors to the Lord out of obedient love.  That is how we will find healing from the self-centeredness that can so easily turn religion into nothing but idolatry.  If we do not want to end up rejecting Christ in the name of a corrupt religion, we must follow St. Paul’s advice: “Be watchful, stand firm in your faith, be courageous, and be strong.  Let all that you do be done in love.”