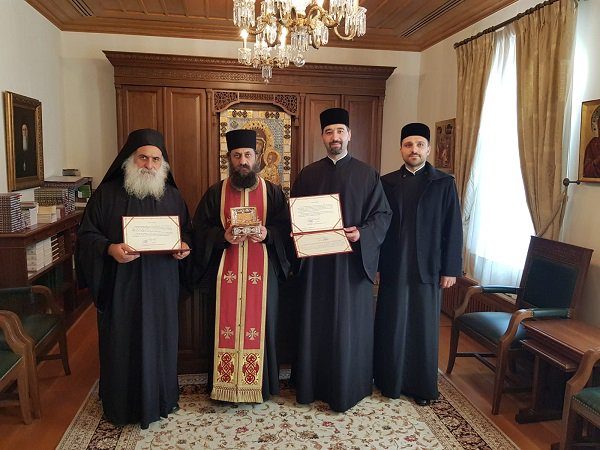 At the request of Vatopedi Monastery, the Romanian Patriarchate hass offered particles of the holy relics of two Romanian Saints who are closely connected with this monastic settlement on Mount Athos.

The reliquary containing fragments of the relics of Saint George of Cernica and Saint Gregory the Teacher was brought Wednesday, October 24, to Vatopedi Monastery by Fr Mihai Musat.

‘The relations of our Holy Monastery with these Saints were very close, given that this Venerable George began his ascetic life in our Holy Monastery, in obedience to a Greek bishop who ordained him to the Diaconate, while Saint Gregory laboured for a certain time in the Kalamitsi area of the Holy Monastery of Vatopedi,’ Abbot Ephraim wrote in his letter to the Patriarch of Romania asking for the relics of the two Saints. 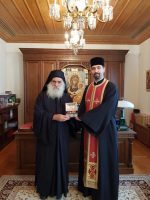 Fr Mihai Musat presenting the representative of Vatopedi Monastery with the reliquary containing the holy relics of Sts George and Gregory. ©Basilica.ro

‘In addition, their feast days are festively celebrated at our Monastery.’

‘Thus, the blessing-bringing presence of a fragment of the grace-gushing relics of these newly appeared Saints will be a source of great joy for us and for our brotherhood,’ Abbot Ephraim noted.

The Holy and Great Monastery of Vatopedi is an Eastern Orthodox monastery on Mount Athos, Greece.

Vatopedi was founded in the second half of the 10th century by three monks, Athanasius, Nicholas, and Antonius, from Adrianople, who were disciples of Saint Athanasius the Athonite.

The monastery was expanded several times during its history, particularly during the Byzantine period and in the 18th and 19th centuries.

The monastery is renowned for holding the Cincture of the Theotokos and many other relics, including the honourable head of Saint John Chrysostom.