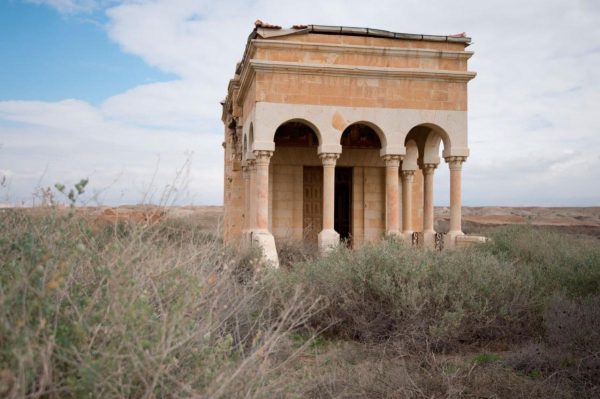 A spiritually joyous event for Romanian Orthodox and all Orthodox faithful occurred in the Jordan Valley on Tuesday, near the site where the Lord Jesus Christ was baptized, as prayers rung out in the Skete of St. John the Baptist for the first time in 50 years.

Archimandrite Teofil Anăstăsoaie and other clergy from the Romanian Patriarchate’s Representation in the Holy Land managed to enter the hermitage’s church with the help of a demining team that had cleared the space around and inside the church.

It was a “very special and exciting day,” Fr. Teofil commented, “because no prayers were heard in the Romanian skete’s church for 50 years; everything was closed, the area was mined, and only the wind of the desert passed through our place.”

The Skete of St. John the Baptist is especially connected with the life of St. John Jacob the Chozebite who was ordained by agreement of the Jerusalem and Romanian Patriarchates in order to serve as abbot at the skete—a position he held from 1947 to 1952.

Pieces of books, icons, and liturgical items were found in the church. “Very few [liturgical items] are left. The iconostasis has no icons, the doors are broken, and the central pillar fell inside the church during the 1967 bombing,” Fr. Teofil commented.

Fr. Teofil also noted that 70% of the hermitage’s territory had been demolished but that the rubble has been removed from inside the church. The area is restricted by the Israeli army for now, but after the entire area is fully demined, access will be restored for pilgrims. The Romanian Patriarchate initiated a fundraising campaign in 2016 to fund the removal of the mines that date back to the 6-Day War in 1967.

The church and the building that housed the skete’s cells were damaged in the war and became unusable.

Photo credit: The Romanian Patriarchate’s Representation in the Holy Land