Source: ROCOR
Natalya Mihailova | 14 May 2015
Dozens of faithful gathered on Friday May 8, 2015, at St John the Baptist Russian Orthodox Cathedral in Washington, DC. All of them, Russians, Americans, Ukrainians, Kazakhs and representatives of other nationalities honored the memory of those who died during World War II, reports RIA-Novosti. 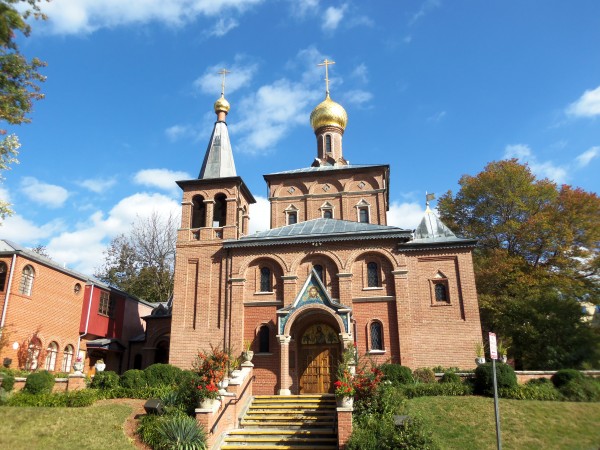 “We gathered today to remember those who lay down their lives for the faith, the fatherland and their neighbors and died innocently. It is beyond comprehension how despite such losses we people of the Soviet Union could be victorious in this war,” said Fr Victor Potapov, Rector of the church. The eminent Russian priest, who lives in America, outlined three reasons why the Soviet people won the war.

“On June 22, 1941, the very Sunday when the Nazis attacked our nation, the church was celebrating the feast day of All Russian Saints. I am certain that all these saints prayed to the Lord to protect their earthly Fatherland. The entire nation in one burst of effort rose up to defend their country, and the enemy was not prepared for this,” he said.

Father Victor noted that “we remember those in our prayers who fulfilled God’s commandment: ‘Greater love hath no man than this, that a man lay down his life for his friends.’ We must pray that never again may such a war take place.”

The memorial service was very touching. Almost all those who filled the church held candles, and the words of the prayers garnered special importance, as the Paschal singing resounded: “Christ is resurrected from the dead, trampling down death by death.”

After the service, a reception commemorating Victory Day was held at the parish hall next door. It was both festive and remarkably familial. “All the money gathered for the event will be sent to help veterans of the Great War of the Fatherland. We decided to send this money to the veterans living in the wonderful city of Kineshma on the Volga River,” said father Victor, adding that this city is very important to his parish, since the altar-table contains the relics of Saint Basil of Kineshma.

Russian ambassador Sergey Kilslyak, addressing those in attendance, called victory day “one of the most greatest of holidays. Listening to the song ‘Do Russians Want War?,’ I posed this question to myself. I understood that the meaning of the word ‘Russians’ is much broader and includes Ukrainians and Belarusian. I refuse to believe that those who now celebrate the memory of Bandera reflect the thoughts and hopes of Ukrainians,” said the ambassador. He noted that our country passed through many tribulations and always emerged the victor.”