Jerusalem, February 19, Interfax – Italian specialists are working on renovating the roof and stained-glass panels of the Basilica of the Nativity in Bethlehem, which is located over the cave where, according to the legend, Christ was born. 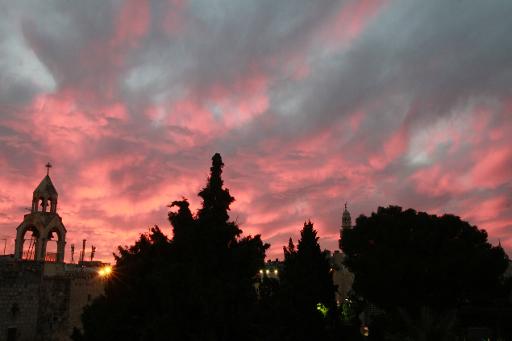 General view of the Church of the Nativity, in the West Bank biblical town of Bethlehem, pictured on December 17, 2013 (AFP/File, Musa al-Shaer)

The work may take from four to five years. The total cost of the renovation is estimated at $20 million. The committee on the renovation of the church is headed by Ziyad al-Bandak, an adviser to Palestinian leader Mahmoud Abbas on Christians’ affairs, the press service for the Jerusalem department of the Imperial Orthodox Palestine Society has reported.

“Our task is save everything that can be saved, for example, the main pylons of the central nave. We believe 80-90% of the roof can be restored,” Marcello Piacenti of Italy, project manager on the renovation of the roof of the basilica, said.

The rest of the timber (300-400-year-old timber of the same color and density as the existing beams) has already been delivered from Italy. The beams will be coated with water-repellent and anti-fungal substances and will be packed in waterproof felt, and waterproof felt will also be put between the roof leaves and wooden structures to protect them from water and heat.

The first stage of the renovation of the roof should be completed by September. Crusade-era mosaic, medieval frescos, external facades, and other parts of the basilica will then be renovated.

Ziyad al-Bandak said the cost of the roof renovation is covered by Palestinian sources by more than 50%. The rest is covered by donations from the Vatican, Hungary, France, Greece, and Russia.

Russia is actively involvement in the development of Bethlehem. In 2012, the Imperial Orthodox Palestine Society built a culture center, where the Russian Science and Culture Center is now located. In March 2013, Imperial Orthodox Palestine Society Director Sergey Stepashin took part in the ceremony for laying down the foundation of a school, whose construction is financed by Russia and where the Russian language will be taught. The school will open its doors to students this year.

Not far from these facilities, private Russian investors are building three buildings of a culture and business center with large sports grounds. The street where this center is located was named after Russian President Vladimir Putin. Russia also plans to finance the historical square around the Basilica of the Nativity.

The basilica is the main tourist attraction of Palestine. It is visited by some two million people every year. In June 2012, the basilica was included in the UNESCO list of World Heritage Sites. It was built in the 4th century on the orders of Roman Emperor Constantine and was restored after burning down in a fire in the 6th century.