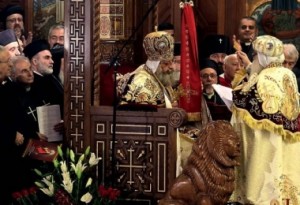 The Coptic Orthodox Church has issued a statement refuting reports that the Coptic Pope has met Saudi Arabian officials over the creation of the first church in the country.

There are an estimated 1.5 million Christians in the strictly Muslim country but they are not allowed to worship publicly.

The MidEast Christian News agency reported that a meeting had taken place between Pope Tawadros II and Saudi Ambassador Ahmed Kattan about the possibility of setting up a church.

According to the news agency, Pope Tawadros II thanked the King of Saudi Arabia and the Riyadh Government for their approval of the building of the church, which would be Coptic Orthodox.

It attributed the story to a “reliable source”.

However the Coptic Orthodox Church in the UK has released a statement saying that the story is a case of “misreporting”.

It confirmed that a meeting did take place between the two leaders but that it related to a pastoral visit to the country by a bishop in the Church.

“This was however a strictly cordial visit by His Holiness Pope Tawadros to the Saudi ambassador to express his thanks for the assistance provided in facilitating the pastoral visit of a Coptic Orthodox bishop to Coptic Christians in Saudi Arabia,” the statement said.

Most viewed articles
Number of Christians Murdered for Faith Rose 60 Percent in 2020: 50 Most Dangerous Countries to Be a Christian193
Admitting That We Hate154
Funeral for Metropolitan Philaret Held in Minsk109
God Is With Us… And Nothing Else Matters101
Building a Fire and Preparing for Theophany92
Churches to Reopen in Greece on January 1858
I Have Fought the Good Fight, I Have Completed the Race50
A Little Light and the Darkness Will Become Heaven15
Most popular authors
Charlene Aaron193
Pravmir.com team166
Archpriest Michael Gillis154
Fr. Gabriel Bilas101
Fr Gregory Scratch92
Metropolitan Hilarion (Alfeyev)50
Protopresbyter Themistoklis Mourtzanos15
Maria Trushanina1