Source: DECR
Natalya Mihailova | 02 June 2016
On 31 May 2016, an international conference on Religions Against Terrorism, organized by the Senate of the Parliament of the Republic of Kazakhstan, took place in Astana. It brought together 60 delegations from over 40 countries, which included religious leaders, parliamentarians and the OSCE representatives. 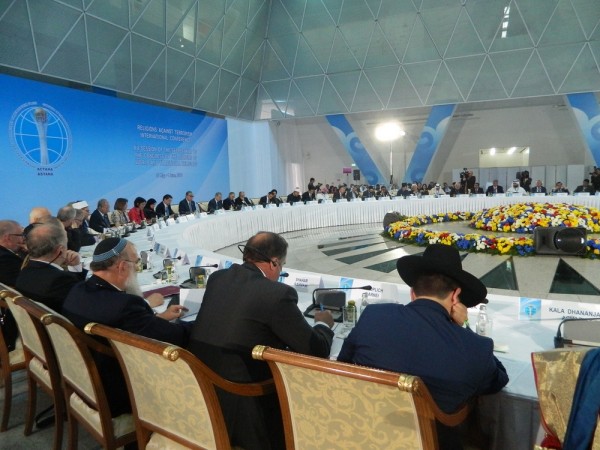 With the blessing of the chairman of the Moscow Patriarchate’s Department for External Church Relations, Rev. Dimitry Safonov, DECR secretary for interreligious relations, took part in the meeting.

At the opening ceremony, Mr. Kassym-Jomart Tokayev, Kazakhstan’s Senate Speaker, who heads the Secretariat of the Congress of Leaders of the World and Traditional Religions, read out a message of Mr. Narsultan Nazarbayev, President of Kazakhstan, emphasizing the necessity for religious and political leaders, public figures and the mass media to organize public awareness campaigns in order to contribute to the destruction of ideological foundations of terrorism.

Rev. Dimitry Safonov spoke, among other things, about the persecution of Christians in the Middle East and North Africa. As he reminded those present, Christians are native and important part of this region’s population. The speaker pointed out the catastrophic scale of the persecution and its irreversible consequences, emphasizing the importance of cooperation between political and religious leaders, as well as of interfaith dialogue, in order to prevent and combat terrorism.

The participants in the conference adopted a statement in which they strongly condemned terrorism violating human rights and freedom under the guise of religions slogans and threatening to destroy inter-confessional harmony, as well as expressed their concern over the vulnerability of young people in the face of extremist ideology, and emphasized the necessity to combine efforts to “eliminate the root causes of terrorism.”

In accordance with the Moscow Patriarchate’s proposal, a paragraph was included in the final document that focuses on the problems of persecution and discrimination of religious minorities.

On the initiative of the Moscow Patriarchate’s representative, the following paragraph was added to the text: “In this context we welcome the meeting of Pope Francis of the Roman Catholic Church and Patriarch Kirill of Moscow and All Russia which demonstrated the willingness of religious leaders to set aside all differences and embark on a dialogue in the name of peace. We support the call for the shared global fight against terrorism made by the leaders of the two major Churches.”