Source: DECR
Natalya Mihailova | 27 October 2015
A prayer at the Representation of the Russian Orthodox Church in Syria for peace in this longsuffering land marked the beginning of a visit of a delegation of the Russian parliamentarians and representatives of the Military Brotherhood Veterans Organization to Syria. 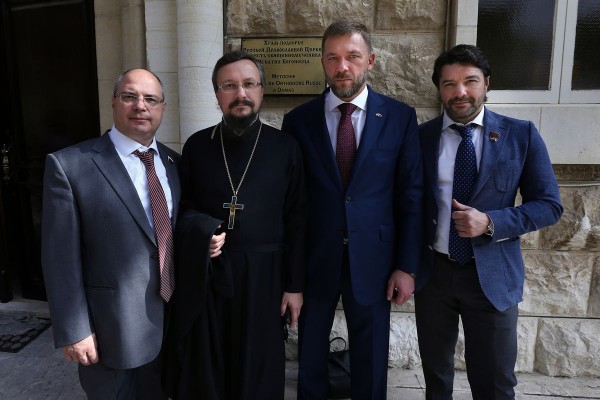 The delegation included Mr. Sergei Gavrilov, coordinator of the Inter-Faction Deputy Group for Protecting Christian Values; Mr. Dmitry Sablin, a member of the Council of the Federation and first deputy chairman of the Military Brotherhood Russian Veterans Organization; Mr. Alexander Yuschenko, a member of the Russian Parliament; and others.

Among those who were praying at the service celebrated by Hegumen Arseniy (Sokolov), representative of the Patriarch of Moscow and All Russia to the Patriarch of Antioch, were staff members of the Russian Embassy in Syria and those few parishioners of the ROC Representation who still live in Damascus.

On October 24, the Russian delegation met with Bishop Lukas of Seidnaya at the premises of the Patriarchate of Antioch and prayed at the Cathedral of the Dormition of the Most Holy Theotokos, one of the oldest Syrian shrines.

Greeting the guests from Russia, Bishop Lukas of Seidnaya noted that the peoples of Russia and Syria were bound up by historical ties. “We are not afraid of terrorists. We will stay in the Syrian land,” the archpastor said and expressed his gratitude to His Holiness Patriarch Kirill of Moscow and All Russia and the state and people of Russia for supporting the Syrian people.”

As Hegumen Arseniy noted in response, the Russian Orthodox Church, led by her Primate, is praying and will continue to pray for peace in the Middle East, for peace in Syria.

“Kind, hospitable and peaceable people live in this country,” Fr. Arseniy said, “Evil forces try to shatter peace, but we are confident that it will reign again in the Syrian land, dear to the heart of every Christian… If Christians will leave the Middle East, their cradle, the Middle Eastern countries will lose a very important part of their identity.”

Mr. Sergei Gavrilov emphasized that the Russian state and society would do all they can to support the Orthodox population in Syria and the whole Syrian people.

The Russian delegation brought to the Department for External Church Relations and Development of the Patriarchate of Antioch, which renders aid to those affected by the hostilities, a consignment of humanitarian aid (foodstuffs, including baby food). Most of the humanitarian aid was collected by parishioners of the Moscow Church of the Holy Resurrection in Uspensky Vrazhek.

That same day, Hegumen Arseniy visited the Russian Embassy in Syria, met with the Russian Ambassador, Mr. Alexander Kinschyak, presented the diplomatic corps with an icon of the Royal Passion-Bearers, and blessed staff members of the Embassy which is often subjected to shelling by terrorists.

During the visit, the members of the delegation met with Mr. Bashar Al-Assad, President of the Syrian Arab Republic; Mr. Wael Al-Halqi, Syrian Prime Minister; Mr. Mohammad Jihad al-Laham, Speaker of the People’s Council of Syria; and other senior officials, as well as with Syria’s Grand Mufti Ahmad Badreddin Hassoun.

The delegation also visited an orphanage for children of the fallen Syrian military officers. The orphanage received a part of the humanitarian aid, collected in Russia.