Source: DECR
Natalya Mihailova | 26 July 2014
On July 24, 2014, Hegumen Arseny (Sokolov), representative of the Patriarch of Moscow and All Russia to the Patriarch of Antioch and All the East, met with His Beatitude Patriarch Bechar EL-Rai of the Maronite Church in his residence in Bkerke, Lebanon. 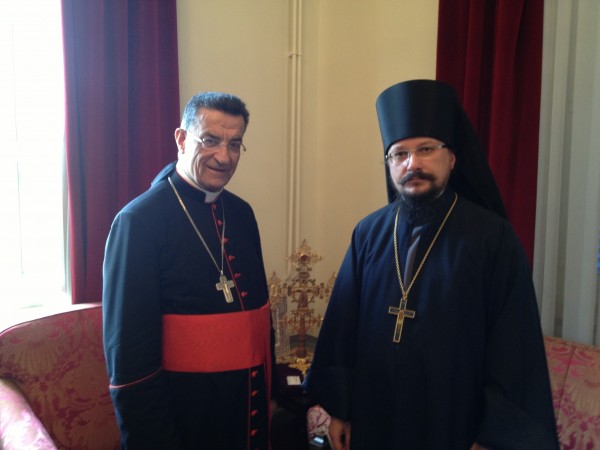 The Patriarch explained to Hegumen Arseny the complicated internal political situation in Lebanon, in which the Parliament has failed for several months now to elect a new president, who is to be a Christian Maronite according to the country’s constitution. “At present various external forces are putting continuous pressure on Lebanon. However, the fragile peace in Lebanon is in God’s hands, and the Lebanese Christians place their hopes on Him alone”, he said. His Beatitude also gave his assessment of the situation in the Middle East as a whole.

Father Arseny, on his part, assured the patriarch that the Russian Orthodox Church led by His Holiness Patriarch Kirill of Moscow and All Russia not only prayed for peace in the Middle East but also gave humanitarian aid to its people, especially Syrian people, among whom are many Christian Maronites united in three dioceses.

The Maronite Church is the largest Christian confession in Lebanon. According to the Lebanese constitution, only a representative of this Church can be president of the country. The total number of the Maronites in the world is 3,2 millions. The Maronite Church has its dioceses in Lebanon, Syria, Israel, Egypt, North and South America, Australia and Cyprus.