Source: ROCOR
Natalya Mihailova | 23 December 2014
On December 5-6, 2014, a meeting was hosted at the Russian Embassy to the United States in Washington, DC, between Ambassador Sergei Ivanovich Kislyak, Natalia Sabelnik, head of the Coordinating Council of Organizations of Russian Compatriots in the USA and members of the Synodal Youth Committee of the Russian Orthodox Church Outside of Russia. 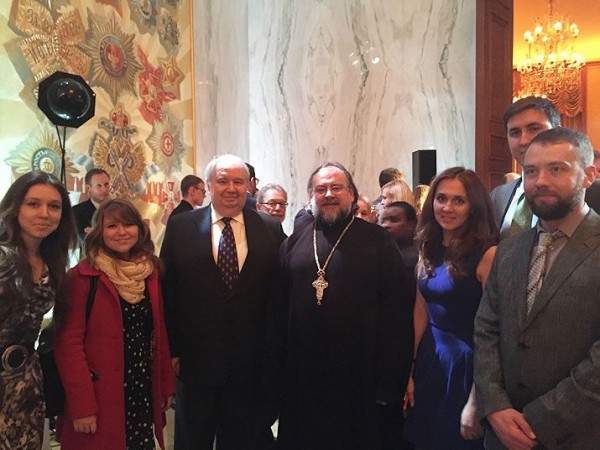 The main goal of the meeting was to discuss and coordinate closer contacts in the cultural and educational fields of social service within the Russian community in America. The event opened with a reception and concert organized by the Initiative for Russian Culture. Mr Kislyak then hosted a round table with his colleagues on December 6. The Synodal Youth Department talked about ongoing projects which need the support of Russian society abroad, and shared their experiences in missionary and social work in America and other countries.

One of these events was the 13th All-Diaspora Russian Orthodox Youth Conference in San Francisco, as explained by Fr Andrei. The forum gathered 150 participants from 11 nations of the world. The Synodal Youth Committee thanked Ambassador Kislyak for supporting the effort and he was given the Medal of St John of Shanghai and San Francisco. The primary goal of that conference was to share experiences in missionary and social service as a necessary element of church life in today’s world; the development of new ideas in this area for the dioceses and parishes of the Russian Orthodox Church.

According to Nadezhda Grankina: “Manifesting the ideas developed at the conference in the area of social service and aid to one’s neighbors, the Synodal Youth Department reached an agreement with the Food Bank of New York to gather food for the needy, including Russians, in the weeks before Thanksgiving. In conjunction with parishes of New York and Long Island, 1,890 pounds of food was gathered, which was enough for 1,609 Thanksgiving meals. Also, the concept of organizing an “Orthodox Initiative” to help sick children who come to America for treatment was welcomed with enthusiasm by the representatives of the Coordinating Organization of Russian Compatriots in the USA.

One of the questions raised at the event was the establishment of cultural and educational projects amid the Russian population in America. The “Tikhvin Project,” as described by Christina Burbelo, would present the youth of the Russian Church Abroad with the opportunity to learn about Russian culture by visiting their homeland, and help renovate Vvedensky Monastery in the city of Tikhvin. Christina said “Work begins immediately upon arrival at the monastery. Gradually, we demolished walls and ceilings of the sports complex built during the Communist era, behind which we found beautiful structures and murals of the original Orthodox church.” She noted that this helped Russian Orthodox youth who live abroad to learn about their culture and to contribute to the restoration of Russian churches.

Adrian Fekula, the director of the youth choir which performed in San Francisco, talked about Russian music in the diaspora. He said that music can serve as the most powerful bond within our culture and Orthodox faith. The talented musical youth decided to organize a permanent youth choir in New York which would perform not only in America but throughout the world, and would invite other choirs from Russia for exchange programs. Adrian pointed out that “the problem is not in the quantity and quality of singers, but in material aid.” He is certain that with the participation and support of Russian organizations in America, a youth choir would bring tremendous benefit to the development and strengthening of cultural bonds in America and abroad.

This event promises to help develop stronger bonds of coordination between the Russian Embassy, Russian cultural organizations and Russian youth in America.

Most viewed articles
Hallowed Be Your Name: Some Grammar and A Reflection213
Who Is the Author of Confusion and Fear?175
Church Dating 1,600 Years Back Discovered in Turkey’s Priene Ancient City159
How to Read the Bible100
Seven-day celebrations dedicated to the Saint who helped Bucharest during plague epidemic begin on Thursday82
Holy Intercession Church in Glen Cove, NY, Celebrates its 70th Anniversary70
Patriarch Kirill Encourages the Media to Report Proper and Adequate Information about the Church61
Since the Start of the Pandemic Moscow Priests Have Made Over 4,000 Visits to Patients with COVID-1942
Words from St. Isaac of Syria1
Most popular authors
Archpriest Michael Gillis213
Fr. Stephen Powley175
Pravmir.com team173
Dilan Pamuk159
Archpriest Lawrence Farley100
Aurelian Iftimiu82
Archpriest Stephen Freeman1