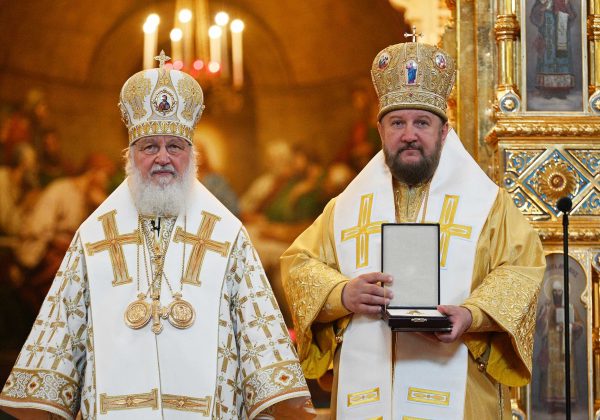 On 28 July 2020, the representatives of Local Orthodox Churches to the Patriarch of Moscow and All Russia took part in the celebration of the commemoration day of the Equal-to-the-Apostles Prince Vladimir, which centered on the Patriarchal liturgy at the cathedral Church of Christ the Saviour. Among Patriarch Kirill’s concelebrants were Metropolitan Niphon of Philippopolis (Orthodox Church of Antioch), Bishop Anthony of Moravici (Serbian Orthodox Church), Archimandrite Seraphim (Shemyatovsky), (the Orthodox Church of the Czech Lands and Slovakia.

Among the speakers at the festive repast after the liturgy was Metropolitan Niphon who addressed His Holiness Kirill, stressing, ‘Glorifying today Prince Vladimir the Baptizer of Russia, we as representatives of Local Churches to your see, greet you on this great feast respectfully pointing to the firm decision of the people of the Kievan Rus’ to follow their prince and live up the words of St. Paul who prayed that all may become what I am (Acts. 26:29)’.

‘In Rus’, Christianity acquired a special spiritual power, strengthening people’s love for their motherland, producing its own missionaries who preached Orthodoxy in other countries, enriching the world with saints who now intercede for us before God’s Throne’, he said.

‘Through centuries, Orthodox Rus’ was a pillar for other Local Churches, and we will never forget the fraternal support she have us in the times of the Ottoman aggression’, he testified referring in particular to the creation in 1848 of the Moscow Antiochian Representation, ‘to meet the needs of the Patriarchate of Antioch which endured distress in the 18th-19th centuries’. ‘And all the consequent Synods, Metropolitans and Patriarchs of Moscow continued this sacred mission of help to our Church of Antioch and other sister Churches’, he stressed.

‘Your Holiness, during your ministry as Primate of the Russian Church, we in the East have repeatedly received special shows of attention, care, brotherly attitude of the Holy Russian Church. One can say, a new tree of life has been planted, which brings the fruit of love in the Orthodox world’, he noted and wished His Holiness many years of life and the Lord’s help in his service ‘to preserve the spiritual heritage of the Holy Equal-to-the-Apostles Prince Vladimir for the glory of holy Orthodoxy’.

Metropolitan Niphon also pointed with gratitude to the invariable attention given to Moscow representations of Local Orthodox Churches by the head of the Moscow Patriarchate’s department for external church relations, Metropolitan Hilarion of Volokolamsk.

Addressing His Holiness on behalf of all those who were awarded that day, His Grace Anthony said he was pleased to be awarded on the commemoration day of the Holy Prince Vladimir the Baptizer of Russia, saying, ‘Prince Vladimir continued the mission initiated by St. Andrew. He sawed the seed of Christianity in Rus’. He noted that the fruits of that planting are millions of Orthodox people in countries spiritually nourished by the Russian Orthodox Church. He also made a special mention of the hard trials experienced today by the canonical Church in Ukraine. ‘Besides’, he continued, ‘the Russian Church has given the Universal Orthodoxy a great number of holy men and women of God – ascetics, martyrs and confessors’.

Speaking on behalf of all those who received patriarchal awards, Bishop Anthony thanked Patriarch Kirill for the high evaluation of their work and said that he sees the Order of the Russian Orthodox Church he received as another testimony to the brotherly attitude to the archpastors and pastors of the Serbian Church and the Serbian people and as a sign of kind concern for representatives of Local Churches to the Moscow Patriarchal See.