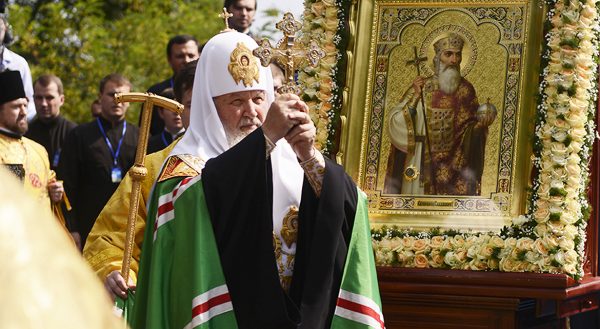 His Holiness Patriarch Kirill said that the baptism of Russia, which radically changed the life of the people, is incomparable with any revolution in the history of Russia in its positive consequences.

“The baptism of Rus’ was, undoubtedly, a revolutionary event, speaking in modern language. Moreover, its consequences cannot be compared with any subsequent revolution, because the Baptism radically changed the life of the people, their culture, and the system of their values,” said the Primate of the Russian Orthodox Church on the Day of the Baptism of Russia, July 28, after the Divine Liturgy at the Cathedral of Christ the Savior, reports Interfax-religion.

His Holiness Patriarch Kirill added that, comparing to the revolutionary event of the Baptism of Rus in the history of the country, there also was the “most formidable revolution” of the early XX century, which tried to change the system of values, primarily by destroying the Orthodox faith.

“But the fact that we recall those dreams of those revolutionaries with a certain condescending smile, because they did not succeed, at this revived Cathedral of Christ the Savior in the 21st century, testifies to the fact that that perfectly organized and powerful political action, accompanied by violence, did not eradicate the Orthodox faith from our people,” said the Patriarch.

According to Patriarch Kirill, “the grafting onto the blessed body of the Ecumenical Church,” which Saint Prince Vladimir organized for Russia, has become the greatest spiritual strength for the people, helping it today to go through the “difficult vicissitudes of the historical path.”

“Everything that has happened to us since the time of the Baptism is a vivid and very convincing argument in favor of the fact that human history is made not merely by man, his mind, his will, and his strength, but by the grace of God, which is present by the prayers of people in human history, without changing human freedom itself, thus affects humanity, and of the fact that faith is alive and active, despite the fierce struggle with it,” he noted.

In conclusion, His Holiness Kirill, Patriarch of Moscow and All Russia, emphasized that the Baptism of Rus “has not lost its meaning and its power to this day,” and “we are all the heirs of Prince Vladimir.”