Source: DECR
Natalya Mihailova | 05 February 2015
The Bishops’ Conference of the Russian Orthodox Church took place on February 2-3, 2015, at the Church of Christ the Saviour in Moscow. It was chaired by His Holiness Patriarch Kirill of Moscow and All Russia. 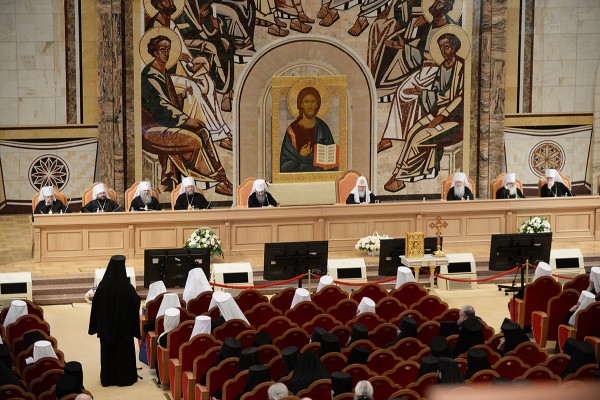 The bishops heard Patriarch Kirill’s report about the work carried out by the Russian Orthodox Church to develop its life and service in all the countries of the canonical presence of the Moscow Patriarchate and in the diaspora. In its resolution, the Conference thanked Patriarch Kirill for his work carried out since the 2013 Sacred Bishops’ Council and for his support of bishops’ initiatives.

The bishops prayed to God ‘to send a just peace to the land of Ukraine, to stop the tragic bloodshed in it, to safeguard it against further sorrows and to bring those who hate each other to repentance and mutual forgiveness’. The participants ‘express unanimous support to His Beatitude Metropolitan Onufry of Kiev and the bishops of the Ukrainian Orthodox Church in their efforts to preserve church unity and to overcome divisions’. The bishops see it as important for stopping the present conflict ‘to move to a large-scale dialogue to enable people of various political views and conviction and cultural and linguistic preferences to determine together the future of their country. In doing so, it is important that no public force be excluded from the decision-making process’. The bishops called the faithful of the Russian Orthodox Church ‘to pray for peace and to give all possible help to innocent victims of the armed conflict. They also called those on whom it depends ‘to urgently exert every effort for stopping the bloodshed taking toll on human life’.

The Conference resolved that further efforts should be made especially in theological education and education of lay people who wish to engage in mission, catechism, youth work and social service.

The bishops welcomed the document ‘On the Participation of the Faithful in the Eucharist’ to serve as a guide for all archpastors, pastors and laity of the Russian Orthodox Church. This document has to be approved by the Bishops’ Council.

Special attention was given to ‘the development of parish life and as the life of a community’. The sacramental reality of common prayer in the Eucharist ‘imposes on church members a lofty duty to be in love and communion with one another by taking an active part in the life of their community. The episcopate should consolidate this community life through the efforts of the clergy and laity’.

The Conference defined as priority tasks for the clergy and laity to develop church volunteer work, mission and care for newcomers to the Church.

The bishops considered rules and procedures for noviciate and processions with the cross.

In its Resolution 10 the Bishops’ Conference states that ‘in the contemporary situation, when faith and morality are confronted with new challenges, it is especially important to ensure free cooperation between the Church, state and society. Its most important aims is to promote the salvific mission of the Church, to ensure the possibility for people to live according to their faith, to assert among people the God-given moral values, peace, justice and welfare for all peoples. Special attention should be given to the efforts to harmonize the values of faith, morality and freedom of choice’.

The Conference further stated that “in building relations with the state power, it is important to seek cooperation and accord for the people’s benefit, while carrying on the prophetic mission of the Church… In society, it is necessary to conduct dialogue with both those who are near and who are far, while rejecting attempts within and without to shake the Church as ‘the pillar and bulwark of the truth’ (1 Tim. 3:15”.

The Conference expressed support for the faithful of the Orthodox Church of Moldova, ‘who have come out in defence of the traditional family and the Gospel’s moral ideals lying in the foundation of their national self-awareness’. In this connection, the bishops expressed concern over ‘the recent persistent attempts of some politicians in Transdniestria to reconsider these values’.

Concern was also expressed for the spreading of neo-heathen cults – the problem which needs a special study and development of a church-wide response, and for increasing cases of sacrilege and abuse of things held sacred by people of various religions. Welcoming the measures of legal protection of feelings of the faithful, the Conference called to respect these shrines and feelings in the areas of media and culture.

Considering the tendencies developing in the sphere of culture, the Conference stressed the need today to distinguish between culture that ennobles the human soul people and anti-culture that makes people slaves to destructive vices, especially when the latter is financed at the expense of taxpayers who do not share their aspiration. A special church analysis should be made of youth sub-cultures which worship vice.

In its Resolution 16, the Bishops’ Conference states, ‘In the year of the 70th anniversary of the Victory in the Great Patriotic War, the clergy and flock of the Russian Church are called to honour in prayer the memory of soldiers and all those who contributed to the preservation of our peoples’ freedom and independence from the external enemy. It is important that all the dioceses hold events devoted to the feat of our compatriots who saved the world from Nazism’.