Given our Church’s biblical, patristic, liturgical and canonical sources one eventually detects that there is no universally consistent and accepted teaching on marriage as to its origin, purpose and goal. Is it prelapsarian or postlapsarian? Is it eternal or temporal? Is it dissoluble or indissoluble? Is it a legal contract between free persons? Is it an accommodation to human passion – a form of legalized fornication - and therefore subordinate to monastic puritanism or is it a sacrament of the Kingdom which leads to the salvation of spouses? Each question has been answered in two ways, yes and no.
admin | 04 July 2011 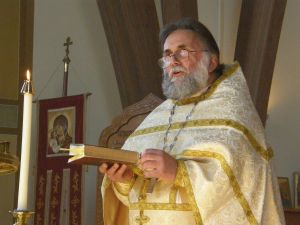 Is the legalization of same sex marriage/union a threat to the Orthodox Church’s stance on matrimony being the sanctified union of one man and one woman? This question is again becoming the focus of many Orthodox Christians in light of the recent passage by the New York State legislature to legalize same sex marriage.

As a priest in the state of Massachusetts where homosexual marriage has been legal since 2004, the law of the Commonwealth has never intruded upon my ministry nor has it sought to alter the Church’s vision and theology of marriage. That some Orthodox Christians feel obliged to voice their opposition to same sex marriage for fear that the Church will inevitably be coerced to comply and therefore oblige same sex couples with a rite of marriage seems premature. On the one hand, civil law does not and will not become the standard for what takes place within the precincts of the Church. On the other hand, the legalizing of same sex marriage in some of our states offers the faithful the opportunity to reflect on the long and complex history of monogamous heterosexual marriage within the Church.

Beginning with our Lord’s public ministry, the Gospel accounts reveal that what he understood marriage to be was not quite in tune with that of the Pharisees. This is especially clear in the discussion about divorce. The Pharisees justified divorce based on the authority of Scripture in the person of Moses. Christ responds: “For your hardness of heart he wrote you this commandment. But from the beginning of creation, God made them male and female. For this reason a man shall leave his father and mother and be joined to his wife, and the two shall become one flesh. So they are no longer two but one flesh. What therefore God has joined together let no man put asunder. (Mk. 2-9) In the Gospel according to St. Matthew an additional detail is contained in Jesus’ response: “For your hardness of heart Moses allowed you to divorce your wives, but from the beginning it was not so. And I say to you, whoever divorces his wife except for unchastity and marries another commits adultery.”(19:8-9)

While the Pharisees and Sadducees argued with Christ over the nature of marriage, in the case of the Sadducees the discussion seems to focus on the levirate system of procuring heirs through a deceased husband’s brothers (Lk.20:27ff), the Pauline letters indicate that the great missionary grappled with issues relative to marriage in light of what he anticipated to be the imminent second coming of our Lord. Combing the Pauline corpus regarding marriage one is struck by the inconsistency of the missionary’s message. For example, was marriage to be encouraged or discouraged? (1 Cor. 7:25 ff) Should a Christian spouse divorce his or her non-Christian spouse? (1 Cor. 7:12 ff) Does marriage exist solely for the bridling of passions and therefore a check on fallen human love? (1 Cor. 7:1-9) Does marriage exist to restore the proper relationship between a man and a woman whereby submissiveness of the wife to the husband the bearing of children result in her salvation? (1 Tim. 2:15) Or, is the sharing of life between husband and wife a reflection of the relationship between Christ and the Church? (Eph. 5:21-33). Because St. Paul was a missionary his approach (or approaches) to marriage should not be perceived as a systematic treatment of the subject. As the Apostle to the Gentiles, he was encountering the new and unexpected not as a Jew but as a Jewish Christian newly converted to the crucified and risen Lord.

Over the course of centuries the Church continued to face new and unexpected challenges. The canons of our Church attest to this fact especially when it comes to marriage and divorce. Once the symphonia between Church and State was established the integrity and sacredness of monogamous heterosexual marriage would eventually be undermined not from without but from within the confines of the Church.

In spite of the many canons seeking to strike a balance between marriage and monasticism and which sought to protect marriage (as well as married clergy) from the monastic or ascetic extremists (Council of Gangra, cir. 341), the balance inevitably tipped toward the latter. A striking example of this imbalance allows for divorce should a spouse choose what is referred to in Matthew Blastares’ “Alphabetical Collection of the Sacred and Divine Canons”(14th c.) as the better life i.e. the monastic life. A divorce was easily granted even in cases where there was no mutual consent.(Letter Gamma, chapter 13) The superiority of monasticism over marriage continues to be a prevailing ethos for many in the Orthodox Church.

Monasticism was not the only challenge the Church would have to face with regards to the place of marriage in society .The issue of slavery also drew the Church and Christian State into new waters. While Christianity contributed to a more humane treatment of slaves, slavery remained an established institution which, for the most part, was necessary for maintaining the natural order. From a Christian perspective this meant that slavery was a social phenomenon established by God. The Letter to the Colossians helps to make this point. St. Paul implicitly states that the relationship between slave and master is just as important as the relationship between wives and husbands, children and parents. (3:18-25) Slavery was a cornerstone in the foundation of a well ordered society. That St. Paul returns the runaway slave Onesimus to his owner – presumably Philemon a “fellow worker” in the Gospel – also shows that slavery as an institution was not to be tampered with.(Philemon 8ff) Parenthetically, one has to ask how the return of Onesimus to his owner stands in relation to Deuteronomic teaching: “You shall not give up to his master a slave who has escaped from his master to you…”(23:15)

By the 4th century slavery as a component of natural law began to be articulated in the writings of the Church Fathers. Yet, with regards to slavery, natural law was understood as a product of sin. As such, slavery was sustained by God’s will as punishment due to human folly and transgression. As Chrysostom stressed, from the beginning God created all men free but because of sin, war and greed slavery ensued. (Eph. Hom. 24)

As the Fathers, both East and West, sought to uncover the source of slavery the slave continued to hold the legal and social status as a non-person. Among other things, this meant that slaves could not marry. While St. Gregory of Nazianzus condemned slavery he remained a slave owner who, in his will, offered them their freedom and personhood. St. Basil the Great saw slavery as a necessary evil. St. Theodore of Studios forbade monks to possess slaves and yet slave holding monasteries were not unknown. Canon 3 of the Council of Gangra anathematized those who encouraged slaves to flee their masters.

The slave as a non-person also comes across in various hagiographies. In these accounts the freeing of slaves owned by a holy person was not first and foremost an act of charity but a way to dispose of property. (cf. the hagiographies of St. Melania the Younger and St. Symenon the Fool) It would take a period of about a thousand years before civil and ecclesiastical law would bestow upon slaves the status of person which in turn allowed them to marry in the Church. Indeed, when God so wills the natural order is overcome.

Given our Church’s biblical, patristic, liturgical and canonical sources one eventually detects that there is no universally consistent and accepted teaching on marriage as to its origin, purpose and goal. Is it prelapsarian or postlapsarian? Is it eternal or temporal? Is it dissoluble or indissoluble? Is it a legal contract between free persons? Is it an accommodation to human passion – a form of legalized fornication – and therefore subordinate to monastic puritanism or is it a sacrament of the Kingdom which leads to the salvation of spouses? Each question has been answered in two ways, yes and no.

If the Church is going to respond to the legalization of same sex marriage/union it seems that it should begin by considering how to minister to those same sex couples who being legally married come with their children and knock on the doors of our parishes seeking Christ. Do we ignore them? Do we, prima facie, turn them away? Do we, under the rubric of repentance, encourage them to divorce and dismantle their family? Or, do we offer them, as we offer anyone desiring Christ, pastoral care, love and a spiritual home?

Indeed, the Church has never sailed these uncharted waters. But our history teaches us that what is new need not compromise Christ who is the “same yesterday, today and forever.”