Source: Ahram Online
Ahmed Ragai Attiya says that the historic UNESCO site in South Sinai poses a threat to Egypt's national security, after the monks turned it into 'a place for foreigners'.
Natalya Mihailova | 17 April 2014 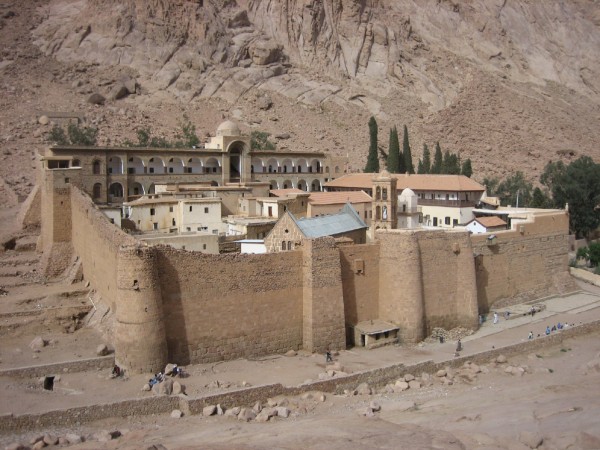 A retired army general says he has filed a court case pushing for Egypt’s historic Saint Catherine’s Monastery to be demolished and its Greek monks deported on the grounds that they pose a threat to national security.

In May 2012, Ahmed Ragai Attiya obtained 71 administrative orders regarding the demolition of the monastery’s multiple churches, monk cells, gardens and other places of interest on the grounds, which he claims were all built in 2006 and thus not historic, according to Ihab Ramzy, the monastery’s lawyer.

However, in an interview with private channel ONTV on Thursday, Attiya said that he has now used the 71 orders to file an official demolition suit with Ismailiya’s Administrative Court against the monastery and 10 of the Egyptian authorities concerned, including the president, ministers of tourism and antiquities and the governor of South Sinai, where Saint Catherine’s is located.

In the same ONTV interview, Attiya levelled a host of accusations against the monastery’s monks, alleging that they have changed the names of landmarks in the surrounding area and tried to hide an underground water source known as Moses’ Well (Oyun Moussa).

He also took issue with them supposedly raising the Greek flag on Egyptian land and turning the site into an area occupied by foreigners, both which he says are a breach of national security and Egyptian sovereignty.

Most of the Saint Catherine’s 37 monks are Greek.

Attiya, who in 1978 founded the Egyptian army’s special operations unit, made similar accusations regarding the monastery at the Journalists Syndicate in downtown Cairo in February.

Ramzy, the monastery’s lawyer, told Ahram Online that he denies all of Attiya’s claims against the monastery and its monks.

The abbot and monks at Saint Catherine’s are not authorised to even paint a wall without permission from Egypt’s antiquities ministry, let alone build new structures, Ramzy said, adding that the personnel on site are only there to guard the monastery.

“[It’s] one of the oldest, continuously inhabited Christian monasteries, with a history that can be traced back over 17 centuries, and is under the supervision of Egypt’s antiquities ministry and UNESCO,” Ramzy said.

He said South Sinai’s antiquities department had sent an official letter to Egypt’s antiquities ministry, clearing the monastery of Attiya’s complaints from 2012.

Attiya, as the plaintiff in the case, has yet to provide evidence of his accusations. The court has since referred the case to an internal panel of experts to determine whether or not the monastery is indeed a historical place and if Moses’ Well lies underneath the site.

The case has been postponed to June 2014, pending the findings of the panel.

Attiya’s accusations also include the Bedouin inhabitants of the region, who he claims have betrayed Egypt by guarding what he calls “the Greek occupants” – i.e. the monks.

Sheikh Ahmed El-Jebaly – speaking on behalf of the Jebeliya tribe which has guarded the monastery for 1400 years – denied the accusations, stressing that his tribe would never allow anyone to attack the monastery or any other place in the area.

“The peace that has existed between the monks and the Bedouin people has made Sinai an emblem of peace” that has served pilgrims and visitors of different faiths, languages and culture, El-Jebaly said, speaking at a press conference last week at the headquarters of the Al-Tagammu Party in downtown Cairo.

Regarding illegal structures, El-Jebaly said that the only “settlements” in the town of Catherine, near the monastery, consist of a housing project authorised by local authorities.

Saint Catherine’s Monastery was built between 548 and 565 on the site thought to be the location of the burning bush, where Moses is believed to have spoken with God and been told that he was to lead the Israelites out of Egypt.

The monastery gets its name from a Christian martyr named Catherine, who according to legend was delivered by angels to monastery and then later buried there by monks after she was beheaded around the year 800.