Right Glory – Orthodoxy in Its Own Language 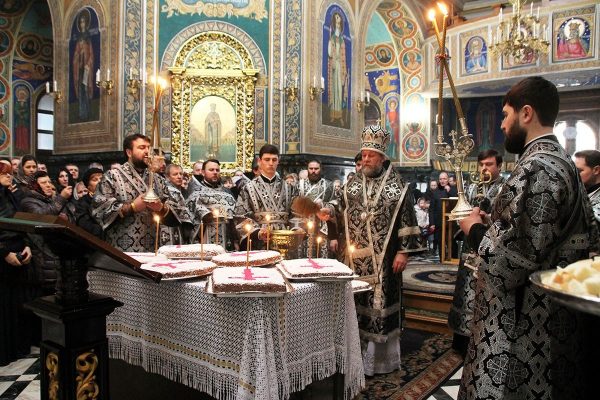 When I was in grad school, I had a term paper graded and returned to me. In it, was a phrase, circled in red, with an explanation and an exclamation mark. It read: “Double modal!” The offending phrase was “might could.” I looked at the phrase, which seemed perfectly acceptable to my ear, and puzzled over it. I consulted my wife, the English major. She politely explained to me that my very common Southern dialect expression was considered “bad grammar.” Interestingly, it is acceptable German grammar (and was once, undoubtedly, good English grammar, somewhere). One of the things that puzzled me was that the delicate provisionality of the expression would be difficult to say in another manner. I settled for something less. Language is a powerful part of the culture in which we live. It not only allows us to express our thoughts, it is the very stuff of which our thoughts are made.

My grad school experience was a grammar-conflict with a Canadian professor. It is quite possible that she had never heard the expression before. For me, despite my education, the expression “sounded” perfectly fine. It had always been part of my culture. In college, I majored in classical languages, Latin and Greek. They were a slow immersion in an artifact of a foreign culture. I recall being puzzled when reading in the letters of Pliny the Younger. He explained to his correspondent that he had not been able to read any that day because he had a sore throat! I was certain that I was somehow not understanding what was on the page in front of me. Turns out (surprise), that, at that point in antiquity, reading was something done aloud. Indeed, four centuries later, St. Augustine of Hippo, was thought rather peculiar in that he read silently (in his head). This seems significant, though I’m not sure why.

Much of my writing about modernity has been, not a campaign against a period of time, but an effort to understand the culture in which I live (and the culture that gave me birth). For example, America’s homegrown versions of Christianity serve as a lens for understanding the culture at large. Why is it so distinct from the Christianity of antiquity? Why is it different in its particular ways (lack of ecclesiology, non-sacramental, lack of priesthood, etc.). A similar line of questioning, for me, also explains much else that surrounds us. American political thought, and most of the broad swathe of its religious thought, are all expressions of the same culture. Thus, American progressive culture-warriors are to political thought what Evangelicals are to ancient Christianity.

Most Americans (particularly Anglo’s like myself) are monolingual – we only speak and understand one language. Although immigration has always brought an influx of foreign-language speakers, their grandchildren are often as monolingual as their compatriots. To be monolingual is also to be mono-cultural. If my observation regarding modernity and Evangelicalism is correct, then it is pretty much the case that those who are born and raised in modern American culture will be natural-born Evangelicals (whether they believe in God or not). That is to say, they will be quite comfortable, even naturally-suited, to a culture in which secularism, and non-sacramental materialism, are dominant. The imagination that creates the “two-storey universe” is uniquely modern.

“Acquiring an Orthodox mind” is very much like learning a new language. It has its own “grammar” and “vocabulary.” But, more than that, it is a way of listening to the world (and God) speaking of its beauty, goodness, and truth. Fluency in a foreign language is something that only comes with time and practice. The same is true of Orthodoxy. The Orthodox faith in America is spoken with a distinctly modern accent (perhaps unavoidably so). Some of this can be seen in how we observe the feasts of the Church. In traditional Orthodox lands, for example, it would be common to see the Church packed-out for the Feast of the Dormition of the Mother of God. In America, it will, most often, be lightly-attended. This is not that people do not love the Mother of God, nor that they do not think the feast to be important. But its grammar is simply not part of our cultural language. We speak Christmas and “Easter” fairly well, and some have a facility in speaking Lent. But our lives move like the tides of the ocean – in which the primary forces are those of the seasonal economy and such. Our culture, for example, is far more aware of Valentine’s Day (the feast of love and chocolate) than the Feast of the Annunciation.

My knowledge of Greek and Latin often allows me to hear things that most would miss. Recently, a mid-week Vespers at Church was commemorating St. Auxentius. I noted word-games in the hymns surrounding him that spoke of “increase.” His name means “increase.” That sort of word-game is extremely common in the services, though impossible to translate. We miss the humor and the puns that weave themselves throughout the liturgical life of the Church. With that, I suspect, we are tone-deaf to much of the fun and pleasure that formed some of the inner life of the faith.

Another example, from two other languages, illustrates some of our modern difficulties. Sts. Cyril and Methodius translated the liturgies and much else into the Slavic language. Doubtless, a very important word for them was “Orthodoxia.” How they rendered that word into Slavonic tells us much about how they heard it in their native Greek. Orthodoxia became Pravoslavie. That Slavonic word is interesting. It is “pravo,” meaning “true,” and “slava,” meaning “glory.” In English, we rightly note that the “doxa” part of “Orthodoxy” can mean both “glory” and “teaching,” or “doctrine.” But nothing in our English-speaking modernity suggests that “Orthodoxy” should be understood as “right glory.” But that is precisely what Sts. Cyril and Methodius thought, and precisely how it came down to Orthodox believers in the Slavic traditions. “Right glory” means “right worship.” Nothing, in all of Orthodoxy, is a “right” as a Russian liturgy. Its “rightness” is older than the Russian language itself. When moderns puzzle over the Old Believers’ schism from the Russian Church over liturgical changes in the 17th century, they demonstrate their tone-deafness to the music of “right glory.”

This particular case points to the dominant intellectualism of the modern world. We tend to think that “ideas” are primary, whereas actions are far less so. During the time of the Great Schism, and the antagonisms between Orthodoxy and Rome, one of the largest controversies was over whether the bread in the Eucharist should be leavened or unleavened. In modernity, such a thing is simply dismissed as a complete triviality. Modernity is ultimately comfortable with grape juice and soda crackers, or, even Coke and cookies. “It’s the thought that counts.”

With all of this, we are likely to be caught up in the ideas. Even the differences between an Orthodox mind, and the mind of modernity, will largely be measured by ideas, which is mostly a modern response. Those who gain fluency in a foreign language understand that fluency only comes when we stop “thinking” about the new language and simply speak it. The same is true of the Orthodox faith. It is not the thinking about it that matters so much as its speaking – that is to say – prayer, liturgy, and such, are far more important than talk (or reading).

During my early years as an Orthodox priest, a teen-age Russian boy in our community, was diagnosed with leukemia. A couple of the Russian women in our parish came to me and wanted the Church to “do” something. I sat with them and brainstormed possibilities. I thought of pastoral stuff – take them a meal, etc. Everything I suggested seemed to go amiss. I struggled to think of what to do. Then, I suggested, “We could do a molieben” (a special service of prayer, quite common in Russia). Suddenly, their faces brightened and they were thrilled. For me, it was a lesson in Orthodoxy. It has taken years to gain a feel for such things – and, even then, I suspect that I only do them with a thick accent.

America is a land of monolingualism. We even export our monolingualism. It’s not just English that is more and more commonly spoken around the world – it is modernity. The growth and presence of Evangelical and Pentecostal churches in traditionally Catholic countries (and elsewhere), is less a mark of successful evangelism and more an artifact of the successful export of modernity itself. Behind it will likely come the prop-wash of secularism and all that modernity entails.

As Great Lent approaches, Orthodox Christians are encouraged to deepen their prayer-life, increasing their fasting and giving of alms. It is a time to deepen our practice of the language of Orthodoxy, nurturing the deep structures of right glory, as we become the voices of all-creation groaning together for the freedom of Christ’s holy Pascha. It is the language of earth and heaven, men and angels, spoken by the saints through the ages.