Source: DECR
Natalya Mihailova | 15 September 2016
Metropolitan Aristarkh of Kemerovo and Prokopyevsk, with the blessing of His Holiness Patriarch Kirill of Moscow and All Russia, visited the Serbian Orthodox Church and took part in events marking the 75thanniversary of the tragedy in Jasenovac. 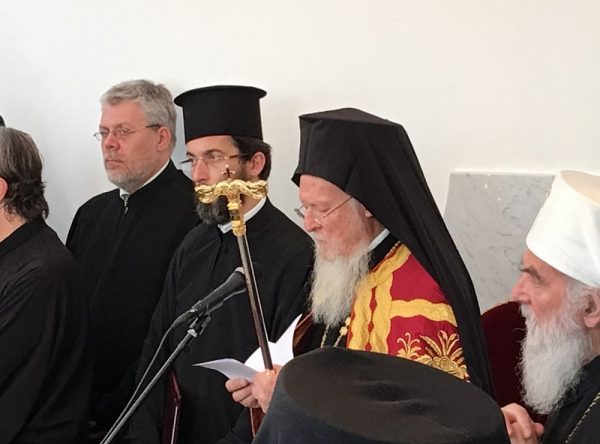 In 1941, the Croatian Nazi Ustashas established the largest regional system of concentration camps – Jasenovac. For the number of years, 700 thousand people were killed in it, including half a million Orthodox Serbs, 40 thousand Gypsies and 33 thousand Jews. Executed in the camps were also people suspected of anti-Fascist activities. According to some estimates, among the victims were 20 thousand children under 12. Many Serbs suffered martyrdom for their faithfulness to Orthodoxy.

The events, which began on September 9, were led by His Holiness Patriarch Bartholomew of Constantinople and His Holiness Patriarch Irenaeus of Serbia. The primates of the two Churches officiated at the prayer service at the Chapel of St. Sava of Serbia in the Orthodox high school in Zagreb, Croatia. The school’s chapel, gymnasium and court were filled with a great number of the faithful.

After the prayer service, a conference on ‘New Martyrs: Poly-Prospects II’ took place at the school’s assembly hall. It was opened by His Holiness Patriarch Bartholomew. Metropolitan Aristarkh spoke on ‘The New Martyrs of the Church of Christ – A Moral Example of Feat (by the Example of Croatia and Kuzbas)’.

On September 10, Metropolitan Aristarkh assisted the primates of the Orthodox Churches of Constantinople and Serbia in celebrating the Divine Liturgy at the St. John the Baptist Monastery in Jasenovac. Among their concelebrants were also guests from the Romanian and Polish Orthodox Churches.

After the liturgy, all the slain Orthodox Christians were commemorated at the mass grave of the concentration camp victims.