Source: DECR
Natalya Mihailova | 28 July 2014
On July 25, 2014, the Holy Synod of the Russian Orthodox Church has begun its regular session at the Patriarchal and Synodal residence in the St. Daniel Monastery in Moscow. 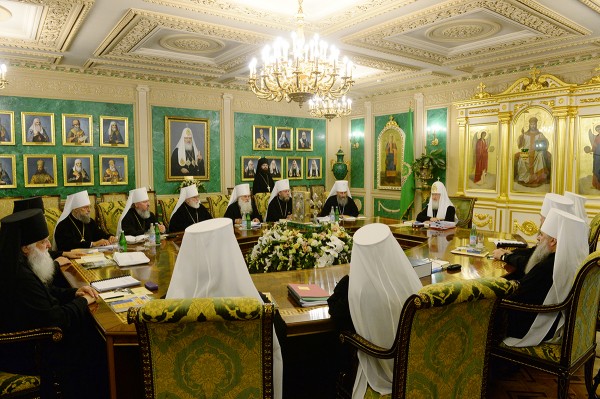 Before the session, His Holiness Patriarch Kirill and members of the Holy Synod proceeded to the patriarchal Chapel of All Saints Who Shone Forth in the Russian Land and prayed for the late Metropolitan Vladimir of Kiev and All Russia.

Summoned for the Holy Synod summer session (March-August) are Metropolitan Alexander of Bryansk and Sevsk, Metropolitan Nikodim of Chelyabinsk and Zlatoust, Metropolitan Zinovy of Saransk and Mordovia, Archbishop Ionafan of Tulchin and Braclaw, and Archbishop Mikhail of Geneva and Western Europe.

Opening the session, Patriarch Kirill awarded Metropolitan Vladimir of Kishinev and All Moldova the Order of St. Sergius of Radonezh in recognition of his zealous archpastoral work and on the occasion of the 25th anniversary of his episcopal consecration.

Addressing the Synod, Patriarch Kirill noted the outstanding services rendered by His Beatitude Metropolitan Vladimir to the preservation of the unity of the canonical Church in Ukraine and after that informed the Synod about the main items on its agenda.

Most viewed articles
The Forgotten Virtue of Stability150
‘The post-Roe generation’: Pro-lifers set their eyes on heartbeat bills, chemical abortion bans106
Utah Church Prepares, Welcomes All for Consecration104
The Savior of the Hopeless, or Is It Possible to Be a Good Person and Not Be Saved?87
Supreme Court Overturns Roe v. Wade in Mississippi Abortion Ruling79
On the Shoulders of Giants48
Most popular authors
Hieromonk Gabriel150
Ryan Foley106
Pravmir.com team104
Alexander Tkachenko87
CBN News79
Archpriest John Moses (+2019)48