A number of important decisions have been made concerning the internal and external activities of the Russian Orthodox Church.
Pravmir.com team | 25 September 2021 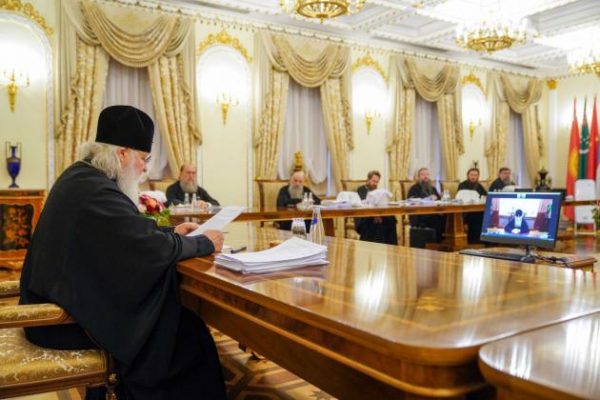 A number of important issues concerning the internal and external activities of the Russian Orthodox Church were resolved by the Holy Synod under the chairmanship of His Holiness Patriarch Kirill of Moscow and All Russia at a two-day session on September 23 and 24, 2021. The session took place in the Throne Hall of the Patriarchal and Synodal Residence in the Danilov Monastery in Moscow. Permanent member of the Synod, His Beatitude Metropolitan Onuphry of Kiev and All Ukraine, took part in the meeting via video communication.

During the session, the Synod discussed the visit of Patriarch Bartholomew of Constantinople to the capital of Ukraine, which took place on August 20-24, 2021. The Synod considered the arrival of Patriarch Bartholomew to Kiev without an invitation from the Patriarch of Moscow and All Russia, the Metropolitan of Kiev and All Ukraine and the legitimate bishops of the Ukrainian Orthodox Church as a gross violation of the canons and noted its purely political nature, revealing the dependence of the Patriarch of Constantinople on forces external to the Church.

The Synod noted that by supporting the schism in Ukraine, Patriarch Bartholomew lost the trust of millions of believers and no longer has the right to speak on behalf of the entire world Orthodoxy and represent himself as its leader.

The Synod confirmed the loyalty of the Moscow Patriarchate to the canons and generally recognized principles of inter-Orthodox cooperation, and also stressed that the responsibility for undermining church unity rests entirely with Patriarch Bartholomew as a result of his anti-canonical actions.

The Synod expressed support to His Beatitude Metropolitan Onuphry, archpastors, pastors and the entirety of the Ukrainian Orthodox Church in their standing for the truth, in loyalty to the canonical unity of the Church.

In addition, the Synod expressed deep sorrow over the fact that on August 13, 2021, Patriarch Theodore II of Alexandria, who had previously recognized the “Orthodox Church of Ukraine”, participated in concelebration with the leader of this structure, Metropolitan Epiphany. In this regard, the Synod instructed to study the possibility of accepting under the omophorion of the Moscow Patriarchate those clergy of the Orthodox Church of Alexandria who sent appropriate petitions to His Holiness Patriarch Kirill of Moscow and All Russia, since they do not agree with the decision of Patriarch Theodore II to recognize the Ukrainian schismatics.

Chairman of the Department for External Church Relations, Metropolitan Hilarion of Volokolamsk, delivered a report on his working visit to the United States where he participated in the International Summit on Religious Freedom, he also delivered reports on the oppression of Orthodox believers in Ukraine and on the persecution of Christians in other countries. After that, the Synod noted the importance of testifying to the oppression of Orthodox believers in Ukraine on international platforms.

The Synod included the name of Archimandrite Gennady (Parfentiev), who was shot by the persecutors of the Church in 1919, in the Synaxis of New Martyrs and Confessors of the Russian Church. The memory of the saint will be celebrated on October 28 / November 10, the day of his repose.

In addition to the annual remembrance of those who suffered during the years of persecution for the faith of Christ, the Synod blessed holding memorial services in remembrance of all Orthodox Christians, who were innocently killed or innocently imprisoned by the enemies of God, on October 30 in Russia.

To the self-governing Churches, Exarchates, Metropolitanate Districts and the dioceses located outside the listed parts of the Russian Orthodox Church, the Synod suggested they independently, based on local needs and conditions, determine the day of holding special memorial services for all Orthodox Christians who were innocently killed or imprisoned by the enemies of God.

The Synod supported the development of the All-Church Orthodox youth movement, and in order to strengthen church care for adolescents, the Holy Synod recommended opening branches of the Brotherhood of Orthodox Pathfinders, which has operated since 1991, in all metropolinates and dioceses where there are such opportunities, and blessed to provide full support and attention to their work.