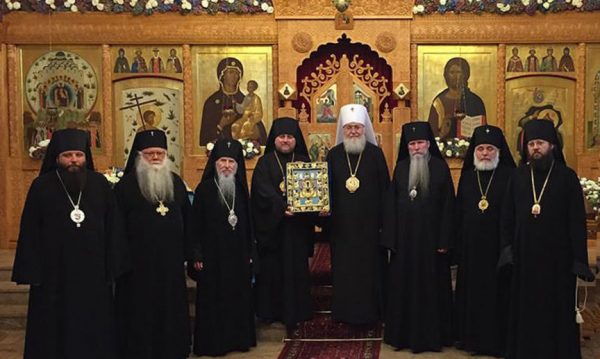 Hearing a report by Archimandrite Roman (Krassovsky), Chief of the Russian Ecclesiastical Mission in Jerusalem (ROCOR), the archpastors prayed for the repose of the newly-departed Abbess Moisseia (Bubnova), who spent the last few years in retirement, and sisters of Ascension of the Lord Convent on the Mt of Olives Schema-Nun Christina and Nun Rufina. Mother Moisseia and Sister Rufina died of complications from coronavirus, and Mother Christina died of cancer. The funeral and burial of Abbess Moisseia were performed on the feast day of Obretensky Church on the property of the convent.

The Synod then deliberated on a written report by Archimandrite Nectarios of the Western American Diocese, Rector of Holy Trinity Monastery in Mexico, on the Mexican mission.

Bishop Irenei, Secretary of the Office of Inter-Orthodox Affairs of the Synod of Bishops, gave a detailed report on the latest events in the Orthodox world and offered for consideration a draft of a new Diocesan Regulations for London and Western Europe.

Archbishop Gabriel, Chief Financial Officer of the Synod of Bishops, reported on the financial situation, and also on the results of a meeting of the Council of Directors of Holy Trinity Seminary in Jordanville, NY.

Upon considering a written report by His Grace Bishop George of Canberra on SS Cyril and Methodius Theological Institute of the Diocese of Australia and New Zealand, the Synod of Bishops invoked Divine blessing on his administration, teachers and students.

To mark the coming 220th anniversary of the assassination of Emperor Paul I, it was decided to conduct Church-wide divine services on the first Ancestors’ Saturday of Great Lent, March 27 of this year, which will be announced by a corresponding ukase.

Archpriest Serafim Gan, Chancellor of the Synod of Bishops, reported on a new Russian-language book being published on the 100th anniversary of the All-Diocesan Council, titled Grains of Wisdom and Piety from the Late Archpastors of the Russian Church Abroad. The tome, scheduled for publication this May, will include 100 spiritual and practical lessons of the reposed bishops of our Church, with photographs of their lives and service. Readers will learn about the spiritual legacy of the Russian Orthodox Church Outside of Russia.

The Synod of Bishops deliberated on a report by Archpriest Andre Papkov on the 2nd Pan-European Church Music Conference, and plans for this year of the Synodal Liturgical Commission which he heads.

The expansion of the episcopacy was discussed, along with pastoral, disciplinary and administrative matters; also discussed were intercessions by the bishops for ecclesiastical awards to clergymen and laity.

The session ended with the singing of “It is Meet.” The next session will take place on Tuesday, May 18.