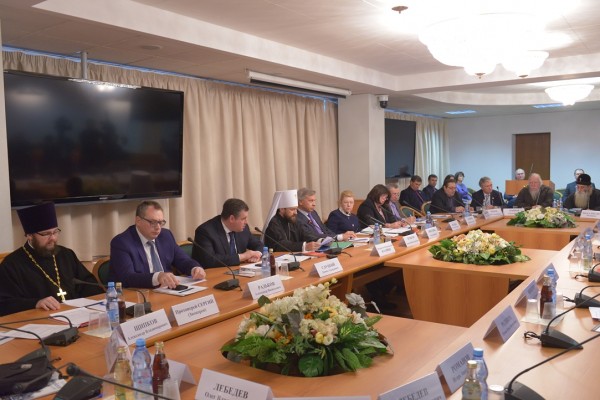 Co-chairing the Conference, which was hold as a part of the 3rd Christmas parliamentary meetings within the 23rd International Christmas Readings, were Metropolitan Hilarion, chairman of the Moscow Patriarchate’s Department for External Church Relations (DECR), and Mr. Alexei Pushkov, chairman of the State Duma Committee for International Affairs.

After Mr. Pushkov’s opening address, Metropolitan Hilarion presented a report in which he underscored: ‘During hard times it is necessary not only to exert strength and will, but, metaphorically speaking, to check the map to know whether we are going in the right direction and whether we have not lost sight of the guiding star of historical development.

‘The values of Holy Rus’ are being revealed in the Orthodox ethics and in love of the good, in the attitude to work as to a virtue, and in mutual aid and sacrifice, shortly, in the structure of life in which the spiritual prevails over the material, and the perfection and transfiguration of the soul is the purpose of life rather than consumption.’

The DECR chairman added that ‘the ideal of Holy Rus’ should not be perceived as something obsolete and forgotten, but should become the main principle of life in society and of the building of relations with other nations.’

Taking part in the conference were scholars, journalists, representatives of the depute corps, governmental establishments, public circles and the Church, including Archbishop Michael of Geneva and Western Europe; Metropolitan Korniliy of Moscow and All Russia, head of the Russian Orthodox Old-Rite Church; archpriest Dimitry Smirnov, chairman of the Patriarchal Commission on Family and Protection of Motherhood and Childhood; and archpriest Sergy Zvonarev, DECR secretary for far abroad countries.