Round Table on ‘Why the Council on Crete has not become a Pan-Orthodox Council?’

Source: DECR
Natalya Mihailova | 22 June 2016
The Round Table on ‘Why the Council on Crete has not become a Pan-Orthodox Council?’ took place at the ‘Russia Today’ International Multimedia Press Centre on June 17, 2016. 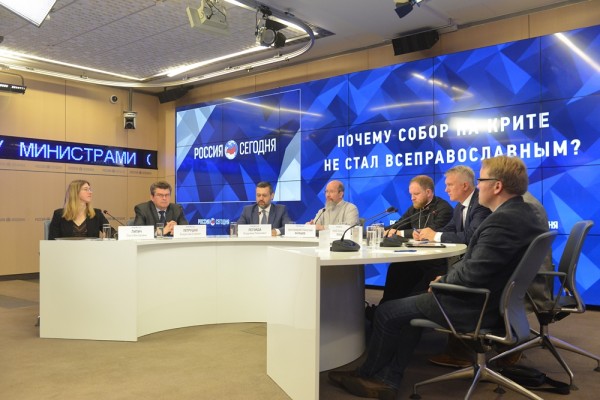 Mr. Legoida opened the meeting and noted that the understanding of the situation with the convocation of the Council on Crete demand immersion into history and comprehension of certain peculiarities of the life of the Church not evident to non experts. He emphasized that the Council is Pan-Orthodox when all Orthodox Churches take part in it; otherwise it is not.

The reason of what has happened is to be found in disagreements and certain difficulties in the interaction among the Churches not overcome before the Council’s opening. ‘It is important to understand, – Mr. Legoida continued, – that we do not take these difficulties as insuperable. Moreover, the Russian Orthodox Church had taken all possible measures for convening the Council on the fixed dates and proposed tools for overcoming these troubles. We disincline to see a tragedy in the fact that they had not been overcome and believe that though the situation is complicated, it is not dramatic.’ 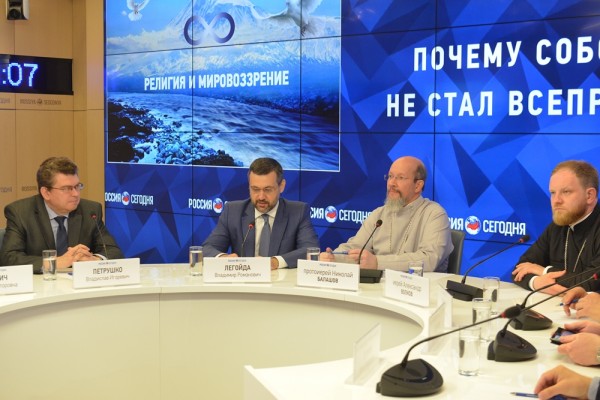 Mr. Legoida does not agree with an opinion often enough voiced by the mass media that the situation shows an impossibility of realizing the principle of conciliarity in the life of the Church nowadays.  He said: ‘Relations between the Local Churches are being maintained, bilateral and multilateral meetings are taking place.  Indeed, Pan-Orthodox meetings had not taken place for many centuries, and now a search is being conducted for the realization of conciliarity in the modern context. The search demands efforts and time. Some people say that the preparations went on for fifty-five years. Maybe, it could take one hundred and fifty-five years to bring into harmony all matters that need to be agreed.’

Rev. Alexander Volkov addressed the preparation for the Council after the Synaxis of the Primates of the Orthodox Churches which was held at Chambésy in January 2016. He explained that the Russian Orthodox Church was one of the few which had done a lot of work having in mind that all Orthodox Churches will gather together on Crete and bring witness to our common cause. 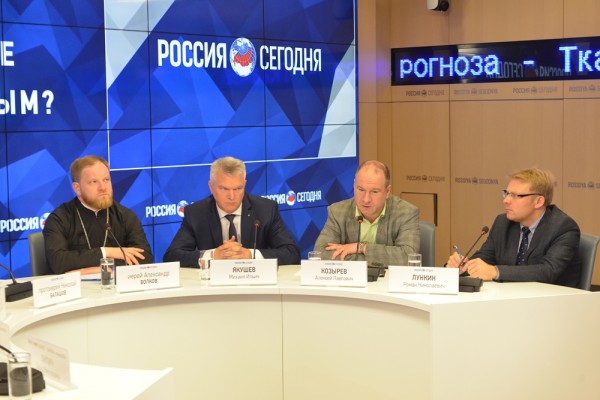 ‘However, at the second meeting of the Pan-Orthodox Coordinating Committee held on Crete a month ago we saw less and less enthusiasm of the representatives of the Local Orthodox Churches. This can be explained by the fact that all proposals concerning organization or finances had been formulated by the Patriarchate of Constantinople and presented to the Local Churches as a given. The Church had to accept them with minor amendments.’ Rev. Volkov believes that the general atmosphere in the process of preparation has brought about the decision of some Orthodox Churches not to participate in the Council and also criticism on the part of the Serbian Orthodox Church. He is confident that an answer to the question ‘why?’ can be found in the reluctance to discuss and overcome difficulties in relations among the Churches rather than in the difficulties as such.

‘We look at the future with hope as it is impossible to cancel so important event for the Local Orthodox Churches. I believe that the Pan-Orthodox Council will take place in the foreseeable future,’ Rev. Volkov added.

Archpriest Nikolai Balashov: ‘The failure of the Council on Crete is a simple and deplorable fact. “It is a common problem in our Orthodox family,” as was said in the letter to Patriarch Bartholomew of Constantinople sent in the evening after the session of the Holy Synod.

As to the preparations for the Holy and Great Council that began in 1961, he said that the process of preparation during the past fifty-five years was not continuous, but went on in snatches. ‘I have participated in all meetings since 2009 when the preparations were resumed and have thoroughly studied the history, using the archives of the Department for External Church Relations kept in which are protocols of all meetings, records of addresses and interim draft documents that show all stages of our common work.’ 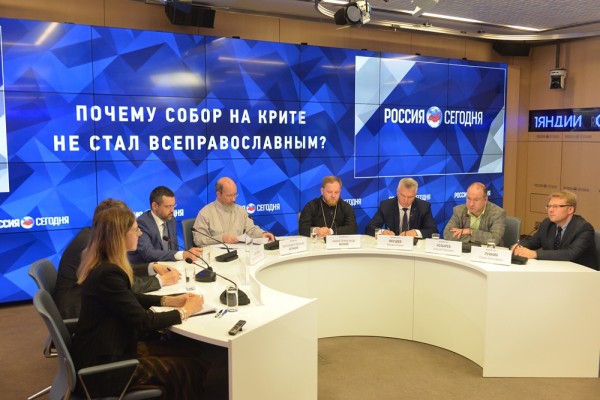 He explained that a list of some one hundred and twenty topics was drawn up in 1961 when a common decision was taken on the island of Rhodes to convene the Council. It was supposed that it will be a lengthy Council and the hierarchs will find common answers to all questions posed by modern people. Fr. Nikolai underscored that the Russian Orthodox Church had prepared draft documents on all topics. Some of these texts have remained interesting and topical, while others have become obsolete in the parts relating to the social and political realities of that time.

‘Fifteen years have passed since the Rhodes conference, and in 1976 a decision was taken to completely change the procedure of preparation for the Council, to make it short and discuss a restricted number of topics,’ Fr Nikolai continued to say. He explained that it had been supposed earlier that each Church would make her own contribution to the drafts and then all Churches would compare all versions and decide which is better. ‘The truth is that only the Russian Church did her “homework”, and the process stalled. That same year a delegation of the Church of Constantinople led by the remarkable hierarch, Metropolitan Meliton of Chalcedon, came to Moscow and suggested to His Holiness Patriarch Pimen to change the order of preparation. The Russian Church was distressed and disappointed, but agreed to hold the Council on a thin agenda and presented a shortened list of topics. The answer was “too many”, and there were ten topics left on the agenda. Yet, some topics, which the Moscow Patriarchate considered important, were later removed, and only six remained on the agenda.

‘The rules of preparation were changed several times, but we, though reluctantly, always gave our consent for the sake of the Council. No one can accuse the Russian Church in the lack of good will.’

Then why a breakdown at the final stage of preparation?  Fr. Nikolai said that the Resolution of the Synaxis of the Primates of the Orthodox Churches taken last January had not been signed by all Churches. His Holiness Patriarch Kirill underscored at the meetings in Constantinople in 2014 and in Chambésy in 2016 that the everyday work was necessary in order to adjust differences before the Council and convene it as the Pan-Orthodox Council.

‘However, this did not happen,’ Fr. Nikolai noted with regret. ‘The Pan-Orthodox secretariat for the preparation for the Council was set up. As its member, I attended two meetings which lasted only four days and dealt with technical and secondary matters, while all matters that the Russian Church presented to the Patriarchate of Constantinople as problems to be discussed by the Pan-Orthodox secretariat were defeated. We were told that they did not fall into the Secretariat’s competence.’

The meeting on Crete did not take place as the Pan-Orthodox Council due to the lack of communication during the preparation. Coordination of the work by the Patriarchate of Constantinople was not a success, Fr. Nikolai said and added that the Church of Antioch had stated her position many times and asked the Churches to render assistance in the settlement of the situation and in her dialogue with the Church of Jerusalem. Alas, the problem has not been solved.

On the current situation he said: ‘It is most likely that the Council will take place, if those who have arrived in Crete for the meeting of the Primates do not decide otherwise. In our opinion, the holding of the Council constitutes a certain threat to the unity of the Church.’

He underscored that the decision taken by the Holy Synod on 13 June, 2016, to support the proposal of some Churches to reschedule the Council and to consider the participation of the Russian Orthodox delegation impossible in case the proposal is rejected was inevitable. The Synod could not decide otherwise because the Bishops’ Council held in February soon after the delegation of the Russian Church had returned from Chambésy resolved to consider the free participation of delegations of all generally recognized Autocephalous Orthodox Churches in the Pan-Orthodox Council as the necessary condition for its convocation. We do not lose hope for the holding of the Holy and Great Council.

This hope, Fr. Nikolai emphasized, is expressed in the message which His Holiness Patriarch Kirill sent to the Primates of Churches who have assembled in Crete. He greeted the participants on behalf of the Russian Orthodox Church and called them not to be confused by the fact that the opinions of Sister-Churches about the convocation of the Holy and Great Council have been divided. ‘According to St. Paul, ‘there must be factions among you in order that those who are genuine among you may be recognized’ (1 Cor 11:19). In the days of preparations for the Council, such differences have become fully revealed, but we must not allow them to weaken the God-commanded unity, to grow into an inter-church conflict, to bring division and trouble into our ranks. We remain one Orthodox family and together we all bear responsibility for the fate of Holy Orthodoxy.’

The speakers answered many questions of the participants in the Round Table.

Most viewed articles
Of Boasting and Modesty96
His Holiness Patriarch Kirill Contracted the Coronavirus93
4th Plenary Session between ROC and Coptic Church Held71
What Does the Cross Mean for us Today?17
Most popular authors
Pravmir.com team164
Archpriest Basil Ross Aden96
Priest Robert Miclean17