Source: DECR
Natalya Mihailova | 16 May 2015
On 14 May 2015, a round table with participation of representatives of traditional religions of Russia and China was held in Beijing within the context of the 4th meeting of the Russian-Chinese working group for contacts and cooperation in religious sphere under the chairmanship of Metropolitan Hilarion of Volokolamsk, head of the Moscow Patriarchate’s Department for External Church Relations, and Mr. Cheng Zourong, deputy director of the PRC State Administration for Relations Affairs. 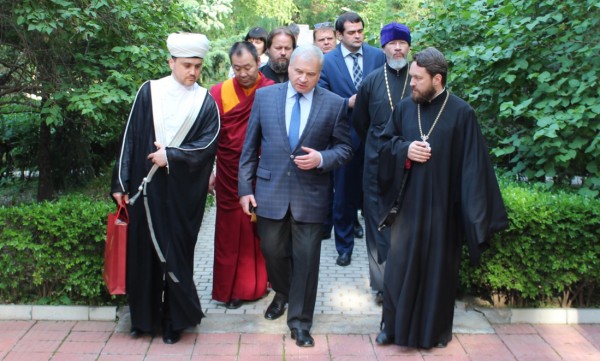 The participants exchanged opinions on the religious factor in modern society. They agreed on the inadmissibility of using religion-specific words for justifying extremism and separatism, noted the importance of consolidation of traditional religions of Russia and China for upholding fundamental moral values and religious culture in the face of the challenges of the modern world in which the process of secularization is developing rapidly, and underscored the contribution of religious communities of Russia and China made in the war against German fascism and Japanese militarism.

The Chinese and Russian participants spoke at length about the importance of contacts in religious sphere for consolidation of relations between Russia and China and for friendship between the people of the two countries which was mentioned by His Holiness Patriarch Kirill of Moscow and All Russia and President Xi Jinping of the People’s Republic of China at their meeting in Moscow on May 8, 2015.

Metropolitan Hilarion underscored in his report that problems pertaining to religion must be treated delicately and suggested to ponder over basic challenges which the followers of different religions are facing. He noted an active entrenchment of a secular model of behaviour upon modern society as the notion of sin is being withdrawn from public life and continued to say, ‘A false interpretation of human rights has brought about the unhealthy amount of attention to the rights of the same-sex couples. However, no so many people see the fact of brutal violation of fundamental human rights, such as the right to life and freedom of religion. We should make traditional religious values of our nations the basis for opposing these tendencies.’

Metropolitan Hilarion told the participants about the centuries-long experience of equal and peaceful coexistence of different religions in Russia and added, ‘Christians, Muslims, Jews and Buddhists live as good neighbours and actively participate in the life of society.’ He believes that conducive to it are dialogue among traditional religions in the Interreligious Council of Russia and partnership relationship between religions and the State, especially in the format of the Russian Presidential Council for Cooperation with Religious Organizations.

The DECR chairman also touched upon the tragic situation of Christians in certain countries of the Middle East, saying, ‘We support the call of Christians leaders in the region to help Christians feel themselves citizens of full rights rather than a ‘religious minority’ in their countries and provide conditions for their living in their home without any fear for their life.’ Metropolitan Hilarion gave a positive example of the involvement of the State in the curbing of extremism in Egypt, where the situation has improved thanks to the efforts of the new authorities headed by President El-Sisi.

Metropolitan Hilarion told the participants that the Russian Orthodox Church sets peacemaking and protection of the rights of Christians as her primary goal and takes an active part in international forums and cooperates with political, public, scientific and other organizations.

After the meeting, Mr. Cheng Zourong gave a reception in honour of Metropolitan Hilarion and the Russian delegation.

The guests from Russia visited   the ancient mosque in Beijing. The leaders of the Islamic Association of China told them about the present situation of Muslims in the country.

That same day Russian Ambassador to China Andrei Denisov met with the delegation and they laid flowers to the memorial cross set up in the territory of the Embassy to commemorate compatriots who had died in China. Metropolitan Hilarion and members of the delegation sang ‘Memory Eternal.’

In the evening the DECR chairman and his suite departed to Inner Mongolia.

Most viewed articles
Our Prayers Should Not Be in the Form of Bargaining141
Conference on the 100th Anniversary of the Russian Church Abroad to Be Held in Belgrade in November110
Glorying In Our Weaknesses110
Happy (Church) New Year!107
Of Snakes And Men107
Representative of the Russian Church at the G20 Forum Stands Up for Believers in Africa and Ukraine68
Conference “World Orthodoxy: Primacy and Conciliarity in the Light of Orthodox Teaching” Starts Today50
Timișoara: Midnight Liturgy and procession with relics on 65th anniversary of canonization of St. Joseph the New31
The Cross, the Goo, and the Butterfly1
Most popular authors
Pravmir.com team225
Abbot Tryphon141
Deacon Andrei Psarev110
Archpriest Michael Gillis110
Fr. James Guirguis107
Aurelian Iftimiu31
Fr. Jeremy1