Source: The Huffington Post
Natalya Mihailova | 10 January 2015
NAPASKIAK, Alaska -- Under delicate snowflakes crocheted by the town mayor, beneath a grand chandelier imported from Russia, a Yup'ik priest in a remote Southwest Alaska village led parishioners in song, prayer and praise day and night this week for Orthodox Christmas, or Slaviq. 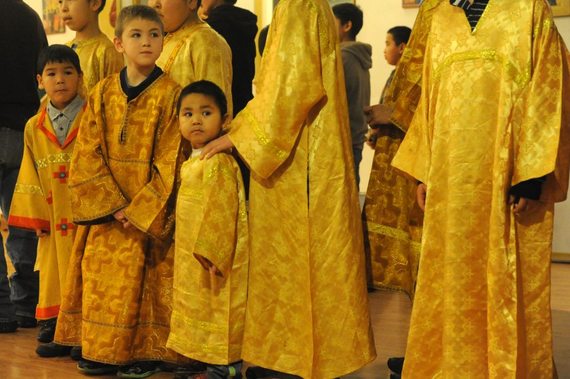 Most of America took down Christmas trees a week ago, but here in the heart of Orthodox Christian Alaska, people were cutting fresh trees for the holy holiday’s pinnacle on Wednesday, Orthodox Christmas Day. The celebration will stretch on for a week or more.

It’s one of the most significant celebrations of the year for a branch of Christianity tightly braided into Alaska Native culture. This celebration is clearly rooted in church, not the mall. Many Yup’ik people who hold fast to their traditions of living from the land also have latched onto Orthodox Christian traditions, even some that Lower 48 parishes have let go. That includes sticking with the older Julian calendar, which designates Jan. 7 as Christmas Day.

Nowhere in the U.S. is there a higher percentage of Orthodox Christians than Alaska, with 94 parishes, 45 priests and an estimated 50,000 to 60,000 church members, said Bishop David Mahaffey, the Anchorage-based leader of the Orthodox Church in Alaska. For the parts of Alaska that are most deeply Orthodox — the Aleutian chain and the Yukon-Kuskokwim Delta, Southeast and Kodiak Island — it’s high season.