Source: Voice of Russia
Natalya Mihailova | 18 April 2014
Russia will continue humanitarian aid to Syria and assistance to the Russian citizens who have decided to leave the country for security reasons, the Foreign Ministry said. On Tuesday, April 15, an Ilyushin-76 plane of the Russian Ministry for Emergency Situations delivered 15 tons of humanitarian aid to Syria’s main seaport of Latakia on the Mediterranean Sea. 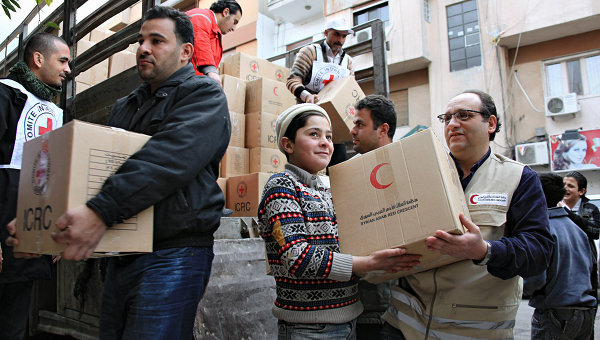 The humanitarian aid was collected by the Imperial Orthodox Palestine Society and included tents, clothes, dishes and foodstuffs, the ministry said.

Humanitarian aid “is expected to be delivered to Syrians affected by the internal armed conflict, including the residents of the Armenian-populated town of Kassab, which was attacked by armed extremists at the end of March, and the Christian town of Maalu”, it said.

“On the way back, the Il-76 plane took Russians, CIS citizens and their families who wanted to leave the conflict area (30 people in all, including 14 Russians),” the ministry said.