Russia has confirmed its intention to continue providing humanitarian assistance to the Syrian people. The firm commitment to support the destitute Syrian people was declared in Moscow to primate of the Greek Orthodox Patriarchate of Antioch, Patriarch John X. The head of one of the most ancient Patriarchates of the Orthodox world has spent almost a week in the Russian capital and met not only with spiritual leaders of Russia, but also with representatives of the political and social elite of the country. 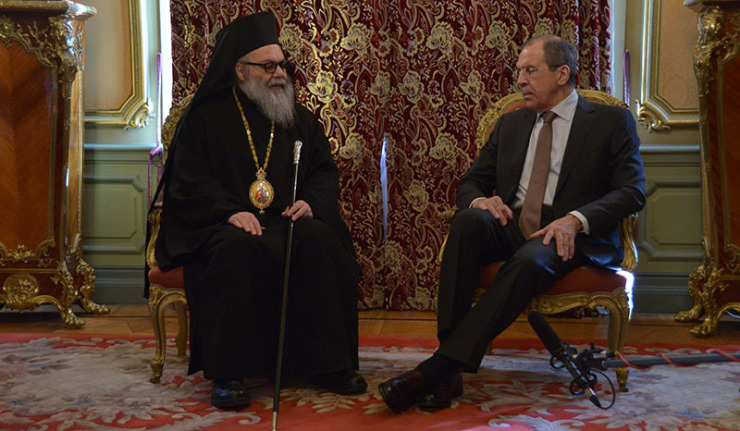 For his Beatitude the Patriarch of Antioch and all the East John X it is the first trip to Russia after the accession to the Patriarchal throne, and it is not just a courtesy visit. He arrived in Moscow at a difficult time for his flock. It is for three years now that bloody clashes, which daily claim the lives of hundreds and thousands of civilians, are under way in Syria. The Middle East region is recognized today as one of the most dangerous for Christianity: the genocide of the followers of Jesus Christ’s teachings has become almost the norm. There are hundreds of thousands of dead, starving and refugees. The Patriarchate of Antioch almost does not expect assistance from Western countries. On the contrary, Russia and Russian Orthodoxy remain one of the last hopes for the Church of Antioch in general and for Syria in particular. And first of all this is due to the long warm relations between the two Patriarchates, Patriarch John X stresses.

“Relations between our churches are deeply rooted in history. And I am glad that in our time, the warm relationship between the two nations is developing, and, I hope, will develop further. Your Church has not once rendered help to us. For example, back in the 19th century, it helped us to build schools and religious institutions. It was always very important for us. Today, we are also interested in the intensification of our relations and friendly ties. It is also important that, in the light of what is happening in the countries of the Middle East today – in Syria, Lebanon, and others – you support us and not only morally.”

During the last year only, Russia and the Russian Orthodox Church have collected more than 40 million rubles for the destitute Syrian people. Some of this money came from parishes and churches of the Moscow Patriarchate in Russia and abroad. Also, from March, 2013, ten EMERCOM planes with humanitarian aid were sent there. The initiator of collecting articles of daily necessity and food was the Imperial Orthodox Palestine Society, the oldest non-governmental public organization in the country. During this period of time, parcels with baby food, complex medical equipment, medicines, school pack, clothing, and water were sent to the poverty-stricken region. With the onset of winter, a consignment of warm clothes was sent to Syria. Now, another humanitarian parcel is being prepared, Deputy Chairman of the IOPS Yelena Agapova says.

“We have established direct contacts with both representatives of the Patriarchate of Antioch, and representatives of the Supreme Mufti, as well as with the Minister of Social Security of Syria. Every time before sending the goods, we specify what they need. The Syrian party explains what the main necessity for them is now. For example, as a result of unilateral economic sanctions imposed by some Western countries against Syria, baby food ceased to be delivered to the country. And little children were left without infant milk mixes. We have twice sent baby food to the region already.”

One of the main results of the current visit of the Patriarch John X to Moscow is the signing of a joint statement on the issue of Syria with the Primate of the Russian Church. According to the document, both churches will now in close cooperation try to save the Middle Eastern Christianity. Today, we cannot remain indifferent to this problem, Patriarch Kirill is sure.

“Christianity still suffers persecution in many places of the planet. According to statistical data, in 2012, more than 100,000 of Christians were killed, and in 2013 – about 70,000. This is happening in our time. Innocent people are killed only because they are Christians. Meanwhile, it is impossible to include in this statistics the exact number of our coreligionists, who died in Syria, where the armed conflict is already lasting for three years. Today, the whole Church, the whole mankind dreads the horrors of this war. Our brothers and sisters in Christ – arch pastors and priests, monks and nuns – disappear without trace and become victims of terrorists. Shrines are being desecrated; state and social infrastructure is being destroyed.”

During his stay in the Russian capital, Patriarch John X has also met with the Minister of Foreign Affairs of Russia Sergei Lavrov. The Minister promised that Russia would make every effort to rescue from captivity brother of the Primate of the Patriarchate of Antioch, Metropolitan Paul, and Metropolitan John Ibrahim, abducted in April, 2013. So far, the fate of both priests is unknown. Just as there is almost no information about the captured nuns of the Syrian Convent of the Saint Equal-to-the-Apostles Thekla. It’s only known that they are still alive.