Russia to express concerns over exodus of Christians from Syria – Matviyenko

Russia is interested in preventing the extinction of the Christian church in Syria, the Federation Council Speaker Valentina Matviyenko said Tuesday at a meeting with the Patriarch of Antioch and All The East John X. “The prospect of a complete exodus of Christians from Syria if such a thing is allowed, threatens to spread the process to other Middle Eastern countries – Lebanon, Jordan, Palestine, this kind of scenario, in our view, would be a civilizational catastrophe for the entire Middle East. 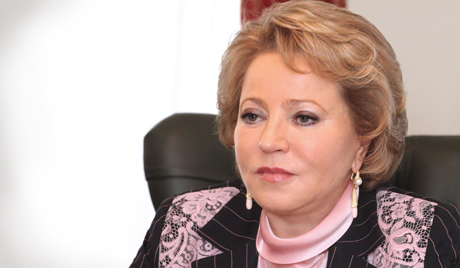 Our country is going to do its best to prevent this catastrophe “- said Matvienko, adding that half a million of Christians In Syria were forced to leave their homes, according to recent data.

Matvienko believes, the disappearance of the Christian church in Syria can lead to «the fatal transformation of historically developed nature of the region.” She noted that Damascus should strive to maintain the country’s principle of coexistence of different faiths.

Speaking of the international conference on the Syrian settlement “Geneva-2”, the Federation Council speaker noted that Russia intends to continue its efforts to support the Geneva process and seek to connect “all sound forces of the world” to it. “Geneva-2” – is the first step to finding a peaceful resolution, a difficult, but crucial work in continuing the dialogue in search for a peaceful resolution of the conflict “, – said Matvienko.

In turn, Patriarch John X thanked Matviyenko for the support and reminded that the relationship between the two churches – the Russian Orthodox and the Antiochian – is historical in nature and established since the time when Russia adopted the Christian faith.

“This love and this bond between our two churches endured through centuries and passed different stages” – said the Patriarch.