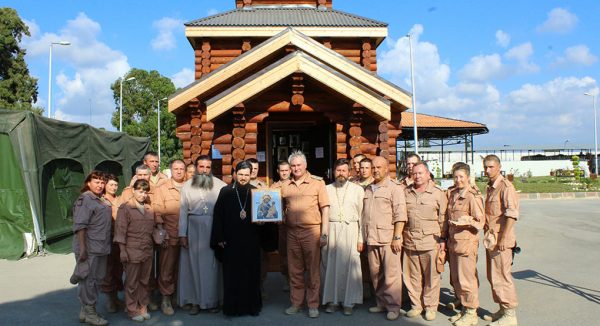 The Moscow Patriarchate’s delegation has recently visited the group of the Russian troops in Syria. An icon with a particle of St. George relics was transferred to the chapel. Over 500 servicemen prayed at the Divine Liturgy, each of them received a small icon of St. George.

Two Divine Liturgies, 18 prayer services and a procession with cross and St. George icon around the airbase were held during the delegation visit to Syria. Eight servicemen were baptized. Five pastoral hours and twelve conversations in groups were carried out, about a thousand servicemen participated in them. There were meetings with the staff of the Black Sea Fleet warship Pytlivy and the Baltic Sea Fleet warship Yaroslav Mydry.