Russian Church is not an Opposition Force – Patriarch 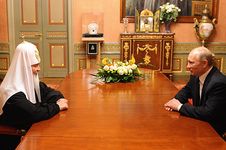 The Russian Orthodox Church is not seeking a merger with the state, but it is prepared to cooperate with any government as it bears responsibility for the moral health of its people and for the maintenance of their spiritual and material culture, said Patriarch Kirill of Moscow and All Russia.

“In this sense it will be in dialogue with any government and it will cooperate with authorities to serve these lofty goals,” he said in the Pastor’s Word program on Channel One.

The Church did not dodge cooperation even in the Soviet-era, “wherever this was possible, where instruments of dialogue, however small, could be used to assert the moral standards and spiritual principles in our people’s life,” he said.

“As previously, the Church will not come off this track, whichever government may holds the reigns of power, because the Church is not an opposition force,” the Patriarch said.

The claimed “merger” is a myth, disseminated by opponents of a strong Church, of our people’s Christianization and spiritual enlightenment, and who use the “merger” argument to intimidate society, he said.