Source: Radio Free Europe/Radio Liberty
Natalya Mihailova | 15 May 2017
A senior Russian Orthodox Church official says he met with U.S. Vice President Mike Pence and told him that the United States and Russia should fight terrorism together. 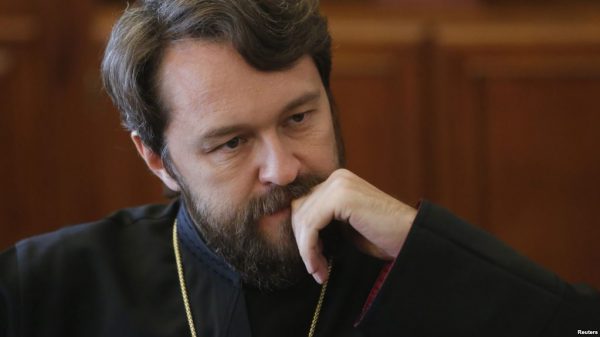 Metropolitan Hilarion, head of the Russian church’s External Relations Department, said he spoke with Pence for a few minutes ahead of the World Summit in Defense of Persecuted Christians, which they both attended in Washington on May 11.

“I told him about what [Russian Orthodox Patriarch] Kirill often says: ‘To defeat terrorism, we need a single counterterrorist coalition,'” Russian state news agency TASS quoted Hilarion as saying. “Not many coalitions struggling against each other but one coalition in which the United States and the Russian Federation should play a leading role.”

Hilarion’s remarks were in line with repeated statements by Russian officials, who have long accused the United States of applying double standards in its fight against terrorism and urged closer cooperation.

The United States rejects the allegations.

President Donald Trump has voiced the hope that the two countries can cooperate more closely against Islamic State (IS) and other extremist groups, and the issue has been a major focus of conversations between Trump and Russian President Vladimir Putin.

But there have been few signs of increase cooperation and the two countries are conducting separate air strike campaigns in Syria.

U.S. official say the Russian operations have mainly targeted armed opponents of Syrian President Bashar al-Assad’s government rather than IS.